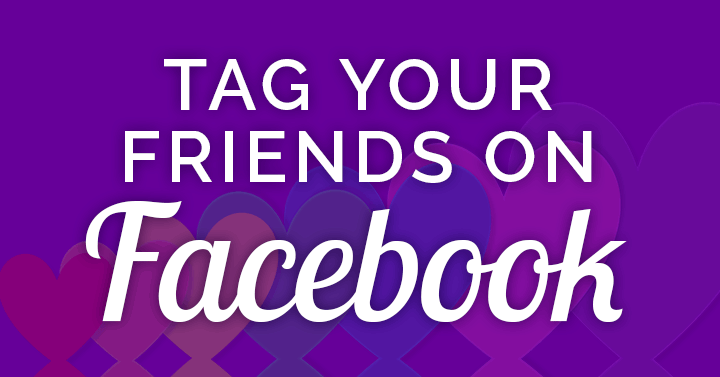 Want to know how to tag first names on Facebook?

Tagging names is a fun way to get attention, and get your Facebook engagement rolling.

But it’s a bit formal to tag your friends by their full name in a casual comment on Facebook.

Here’s how to mention someone on Facebook with a shorter name than the full name they have on their profile.


Note: The average Facebook user says “tagging” for what I describe below. Other terms for it are “mention,” “@mention,” or “at mention.”

Facebook also uses “tagging” to describe adding a person’s name to a photo or video, saying you were with that person, or that they appear in the photo/video.

I will show that in this article as well, but that kind of tag can’t be shortened.

You can easily delete a last name or first initial (or both) to tag a friend by the part of their name you’d normally use in conversation.

Once you’ve typed 5 letters, a drop down will appear with tag suggestions. Even similar names will appear! 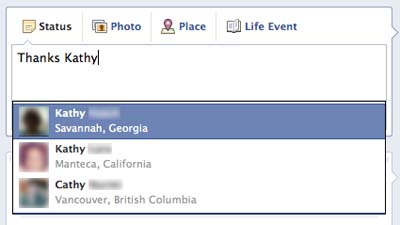 For instance if I type Kathy, Cathy also pops up. If typing Stevie, Stephanie names appear. How cool is that?!

Just click to choose the one you want, and use the backspace or delete key to remove the last name.

If a friend has more than two words in their name, the tag can be shortened to any word or adjacent words.

The tagged name will alert your friend that you mentioned them, and also will appear as blue hyperlinked text in a status update or comment.

You can also tag names in a Facebook post with color background! In this case the name will be a hyperlink that’s underlined. 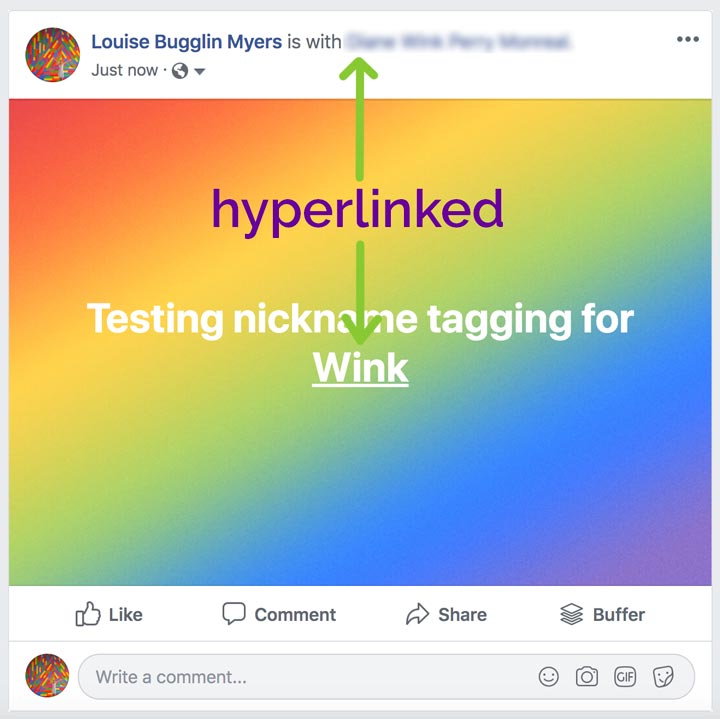 Type the nickname into your status update or comment. 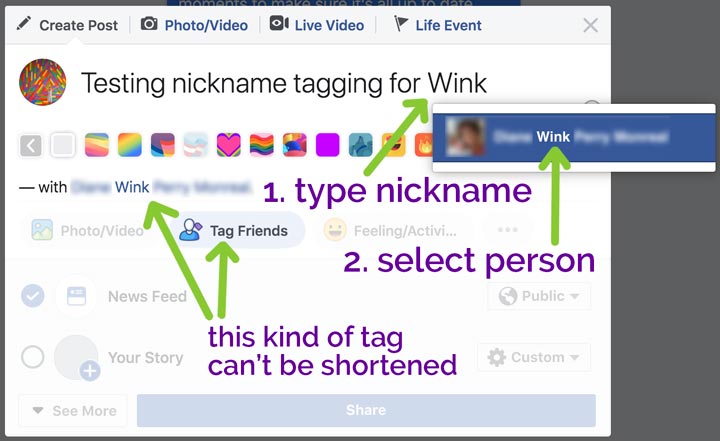 If the nickname appears within your friend’s Facebook name, you can use it as a hyperlink tag. If it doesn’t, you can’t tag the nickname.

You’ll know if it’s hyperlinked if it turns blue.

But if you start typing a nickname, their profile name should appear. If you type “Stevie,” you’ll be able to tag “Stephanie,” if that’s the name your friend has on her profile.

Similarly, if your friend has “Kathy” on her profile, you can’t tag “Katherine.”

In addition, only tags of friends can be shortened. Tags of Pages, Events, Groups and other Facebook properties will become inactive if a you try to shorten them.

Here’s a quick video to show you name tagging in action. Use of the @ symbol is no longer necessary.

While this feature can be flaky, there are some times when you can’t tag someone:

You can’t force a tag. If none of the above issues apply to you, it could be a temporary glitch. Try again later.

If you’re having trouble tagging a Page from another Page, there is a workaround.

Remember, you can’t shorten the tagged name of a Page.

It’s also possible the Page disabled tagging, but for the most part, Pages appreciate being mentioned.

And so do friends, if you use tagging appropriately and not to excess.