Home » Quotes » Top 10 Most Memorable Movie Quotes from the 80s

Love movie quotes from the 80s?

Looking back at movies you loved, or ones from the year you were born, is a fun way to see how popular culture was at that time.

Each year has its own set of memorable movie quotes, and it’s interesting to see which ones have stood the test of time.

Let’s check out some of the most famous quotes from movies released in the 1980s.

So if you were born in the 80s, or remember it from a more seasoned point of view like me 😉 take a look at these famous movie quotes from the 80s! 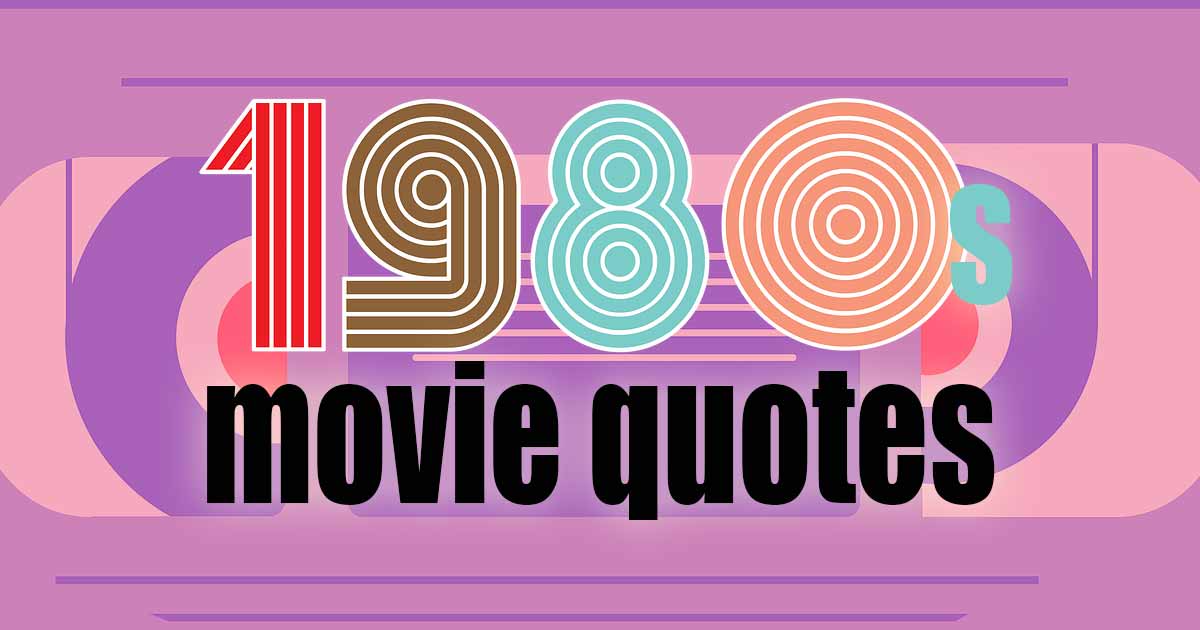 Why Do Some Movie Quotes Become Memorable?

Movie quotes can be so iconic and timeless that they’re commonly recycled throughout the years in different contexts.

But what is it that makes certain lines stand out more than others?

Well, a great movie quote is usually memorable because it’s relatable, cleverly written, and carried off with genuine emotion.

The delivery of the line by the actor or actress increases its memorability. Think Bruce Lee offering up his quote “Be water, my friend” in 1973’s Enter the Dragon.

Even when quoted away from the film itself, these well-known sayings can still bring the film to mind almost instantly.

All in all, great movie quotes grab their place in pop culture due to their power of connecting with audiences.

In a surprising twist that was kept secret until moments before the scene was shot, Darth Vader reveals himself as Luke Skywalker’s father. It was a shock to moviegoers, and the quote lived on in history — albeit misquoted the majority of the time.

Quote: “Listen to me, Mister. You’re my knight in shining armor. Don’t you forget it. You’re going to get back on that horse, and I’m going to be right behind you, holding on tight, and away we’re gonna go, go, go!”

When Ethel’s husband Norman (Henry Fonda) tells her nothing looked familiar to him when he tried to drive to town, she’s supportive and says they’ll go to town together. She reassures him she will always stand by him.

In a scene that freaked everyone out the first time they saw it, little Carol Anne Freeling stares into the static of the television set and says, “They’re heeeeere,” to let everyone know that the demonic ghosts are back.

Independent filmmaker Charles B. Pierce wrote this line into “Sudden Impact.” It was a threat Pierce’s father used to tell him for not mowing the lawn. In the movie, Dirty Harry utters the line after shooting a number of thieves inside a diner and then facing off against the last one.

One of the most repeated movie quotes of all time, Schwarzenegger’s famous “I’ll be back” line was almost “I will be back.” The star told director James Cameron that he had a hard time saying the word “I’ll,” but Cameron pressed Schwarzenegger to keep practicing the line and it paid off.

Quote: “I guess you guys aren’t ready for that yet, but your kids are gonna love it.”

Marty said this after he played Chuck Berry’s “Johnny B. Goode” at a 1955 dance he time traveled to, complete with guitar solo at the end. He opened his eyes to find an awe-struck crowd on the dance floor.

Fire and destruction all around him, Private Hudson delivered this memorable line that Bill Paxton said he improvised. The inspiration came from the end of video games when the words “game over” appear.

Quote: “Nobody puts Baby in a corner.”

This time-honored quote comes at the finale when Johnny Castle makes his entrance into the summer retreat talent show to dance one last dance with Baby. He approaches the table where Baby is sitting in the corner, and tells her parents, “Nobody puts Baby in a corner.” Turns out, Patrick Swayze didn’t want to say the line. Film fans are glad he did.

Four criminals team up to commit a heist in London, only to turn against each other. In this scene, Wanda, played by Jamie Lee Curtis, argues with Otto about his stupidity and how he’s messing up the plan.

Often mistaken for a baseball movie, “Field of Dreams” is a father and son movie. It’s the story of a deceased and estranged father attempting to reconnect with his son. In the line, “If you build it, he will come,” the “he” refers to Ray’s father, who, in the end, appears on the baseball field.

Credit: These quotes were excerpted from Stacker per CC4 license.

Famous 80s Quotes for the Year You Were Born

If you were born in (or lived through!) the 1980s, these movies are probably familiar to you.

Some of those films might be your favorites, or maybe you hated them! But they’ve all earned their place in popular culture.

What’s your favorite movie quote from the 80s? 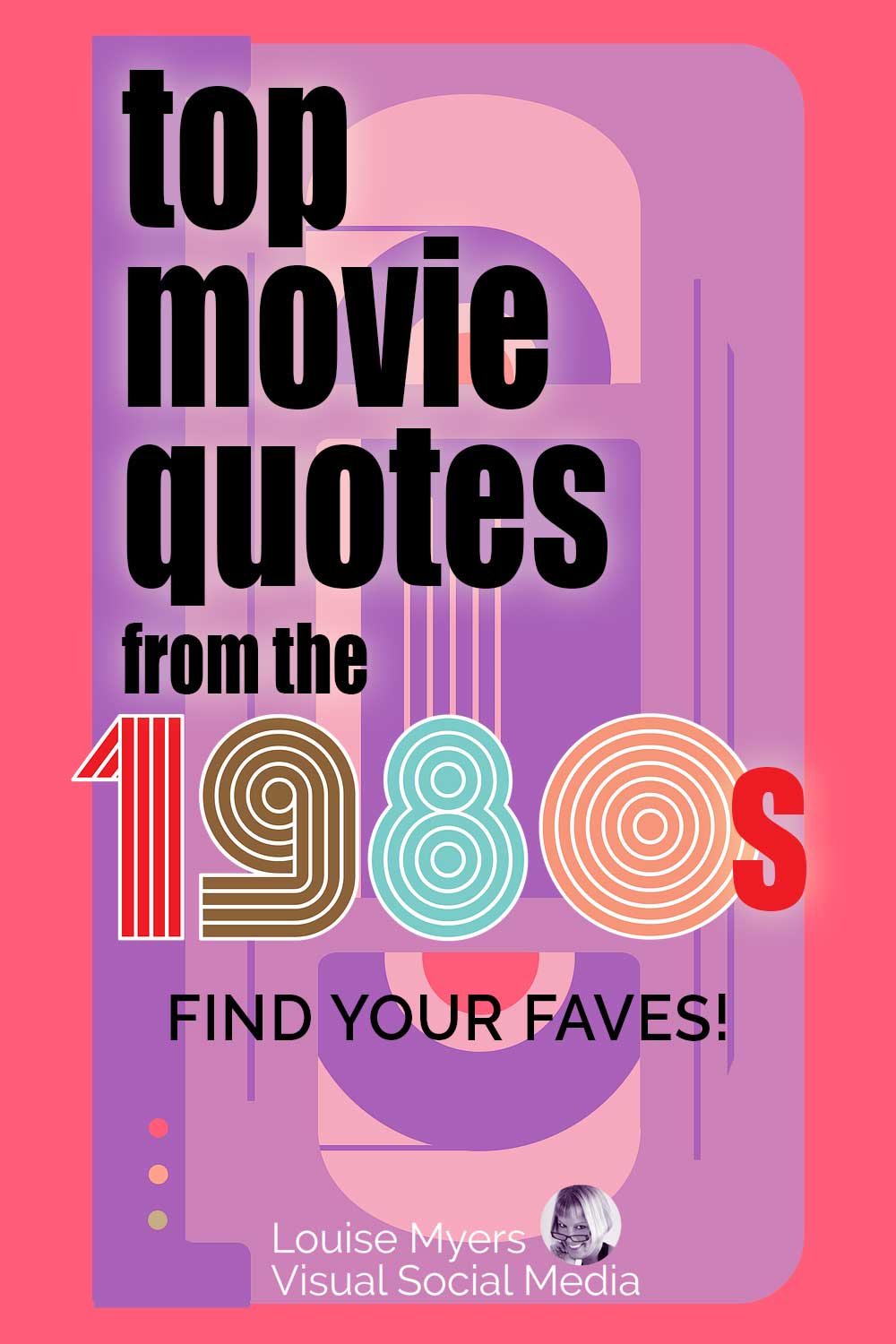