Want to use the color red powerfully?

First you must learn the color meaning of red!

Red is a primary color and one of the easiest for our eyes to spot. It has strong meanings around the world, both positive and negative.

It can make us more attractive when we wear it.

Or tell us that there’s danger ahead at a stop sign.

Let’s take a look a the meaning of the color red. 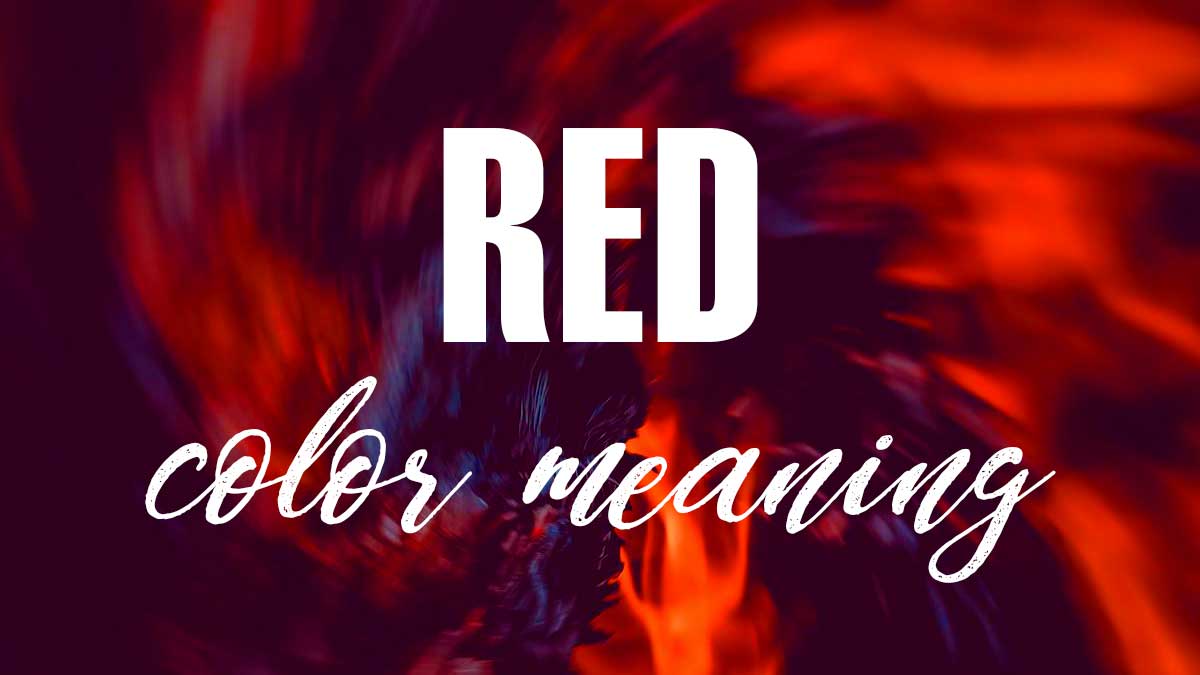 Red is often said to be one of the most dominant of colors.

The ability of red to grab attention makes it popular for warning signs. But it also makes us feel safe against harm.

Red can make us feel excited and give us energetic feelings.

It has contrasting meanings, being the color of passion but also aggression. Some studies even show we find people more attractive when they wear red clothes!

And red power ties are still a go-to option for businessmen across the world.

How the Color Red Affects People

Red has some interesting effects on us depending on the situation where we find it.

Red is the second most visible color after yellow. That means it grabs our attention and that makes it useful for things that warn of danger.

It is why stop signs are red, and why a fire engine is also red.

Red traffic lights are used to grab our attention and prevent us from proceeding in unsafe conditions. 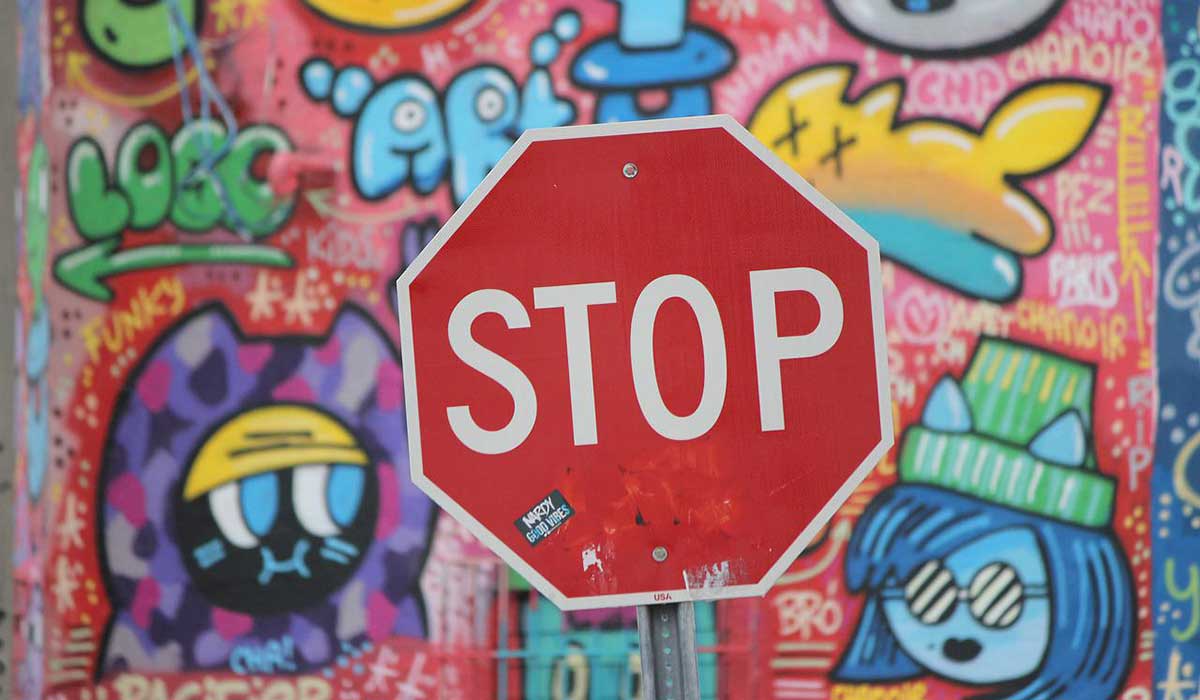 Seeing the color red has been shown to increase blood pressure and heart rate. We even breathe faster when exposed to the color.

It’s also known to stimulate appetite, which is why fast-food chains often use the color in their branding!

Red is the color of passion and desire. And it’s used when giving gentle and heartfelt sentiments.

That’s why it’s associated with romantic moments and occasions such as Valentine’s Day. 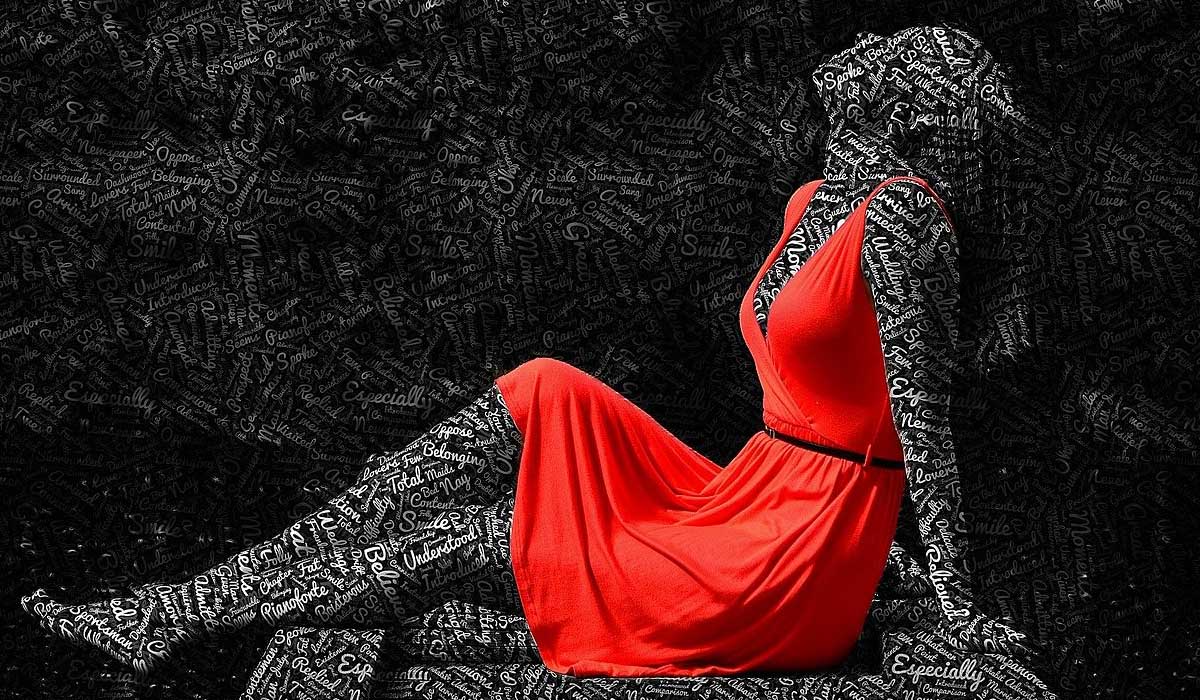 Negative Connotations of the Color Red

Red is often connected with aggression and power.

It’s why we use the phrase “seeing red” when we are angry. The changes in our body bring out the redness in our faces from increased blood pressure.

It is also seen as a dominant color which is why many sportspeople and teams choose it. Athletes wearing red report feeling more dominant and aggressive.

The negative connotations are also why red lightsabers are red, in the Star Wars universe! Red lightsabers indicate the dark side (the bad guys!). By using the Force, they pour negative emotions such as rage, hate, fear and pain into kyber crystals, which gives them a distinctive crimson or red hue.

A “red flag” is also a sign that something is wrong.

Being “in the red” is usually a negative financial situation, where a person or business has more financial liabilities than assets. AKA, broke! 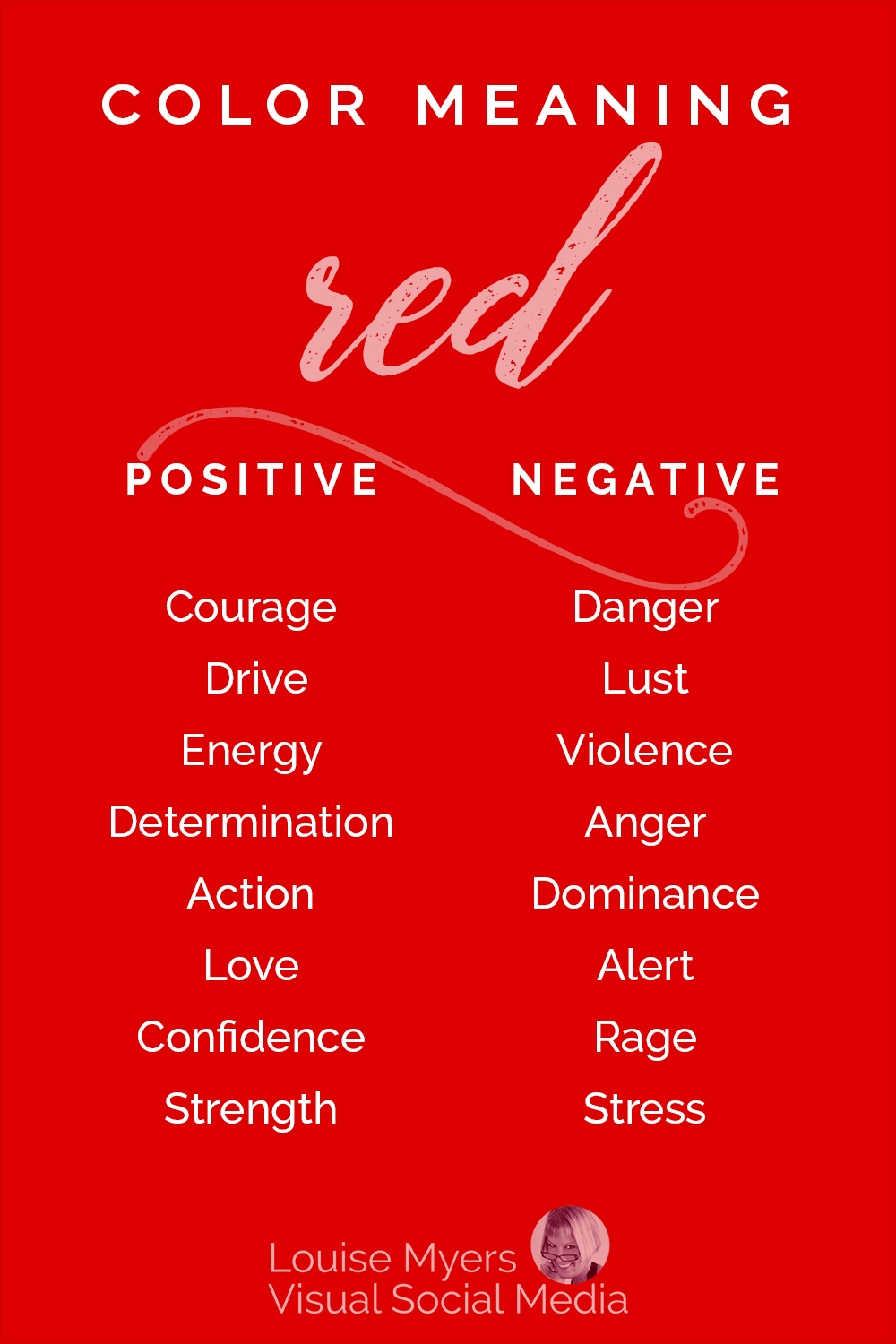 Red Meanings Around the World

In China, red is a color associated with good fortune and good luck. Because it’s seen as lucky, red is worn at big celebrations, such as Lunar New Year.

Brides are often dressed in red for weddings. Red envelopes are given with money in them for special occasions.

Red is seen as positive in East Asian stock markets and indicates a rise in stock prices. This is the opposite way of North American markets, where it shows a decline in prices.

In South Africa, red is the color of mourning. Thir flag has red in it to represent the bloodshed in the country’s past and its struggle for independence.

In Latin American countries such as Mexico, red is associated with religion and is used alongside white. 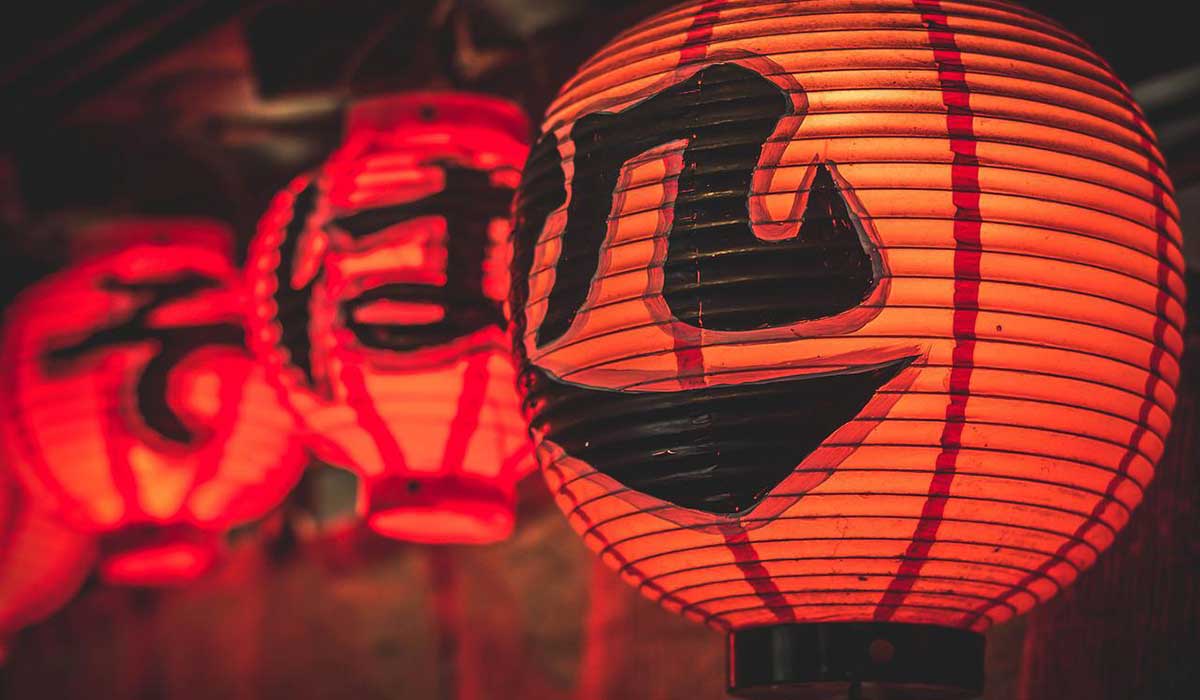 In terms of personality, people who love red are driven and determined. They often need physical fulfillment and enjoy fitness challenges.

Their personalities are outgoing and assertive, often prone to impulsive actions.

Read more about what it means if red is your favorite color.

Color Red Meaning in the Bible

Red is associated with blood in the Bible, but also with atonement, sacrifice, and life.

Both red and scarlet feature in the Old Testament, and there are mentions in the New Testament too.

Red is the official color that represents the Christian Church. It represents fire, and thus the presence of God.

It also symbolizes the blood of the martyrs and in some church traditions, it’s used to commemorate special days for martyrs or saints, or in ordination ceremonies. 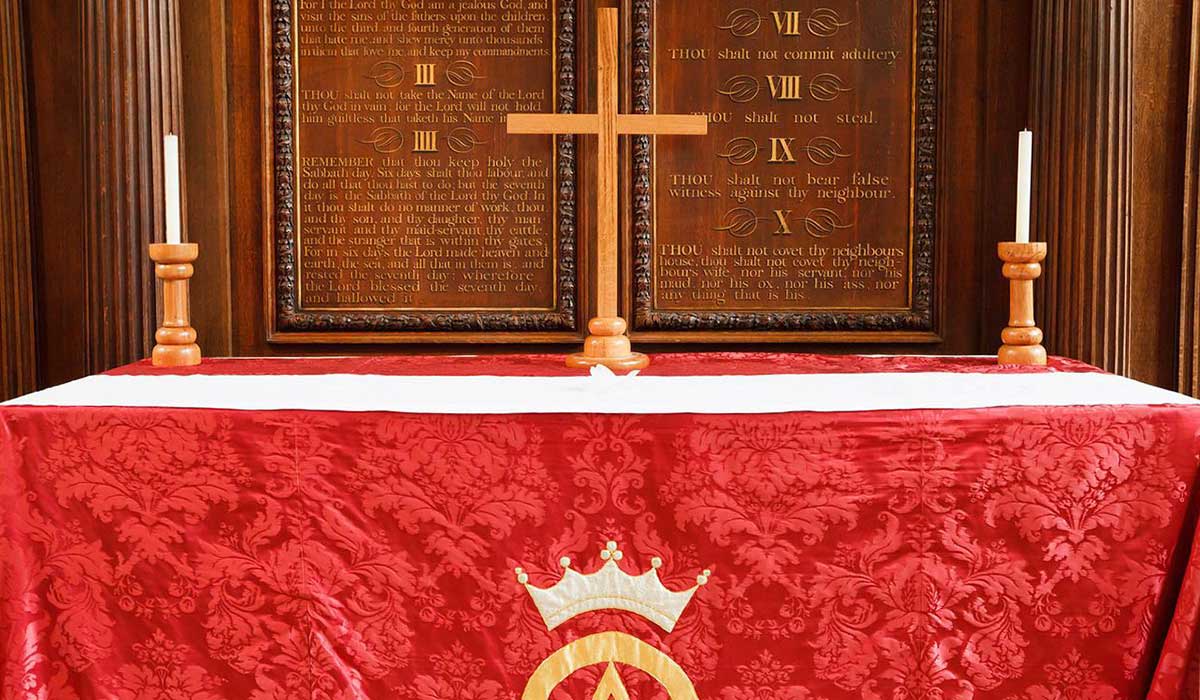 Other Spiritual Meanings and Symbolism of Red

Red is the color of the base or first chakra, Muladhara.

It is associated with survival and safety, as well as basic drives such as hunger.

Red is also said to emit a vibration that causes you to want to take action. It is the strongest color in the physical realm.

Seeing a lot of red is believed to be a sign that things are changing and a new foundation is needed.

Red in dreams is memorable, something you should take notice of.

It can also be associated with shame or things we are running from.

Red means essentially the same things in art and design as anywhere else. But it can exude different emotions depending on its use.

Let’s look at how red tends to fuel passion, whether it be in an aggressive sense, or that of love.

You can build a composition that fuels intense, fiery passion by using bright reds and strong lines, as Edvard Munch did in The Scream.

Use softer reds to represent love and emotion. Pair them with complementary colors to heighten the effect. Use soft shapes and shadings. You can see the effect in Henri de Toulouse-Lautrec’s painting, The Bed.

Infographic is compliments of Invaluable. 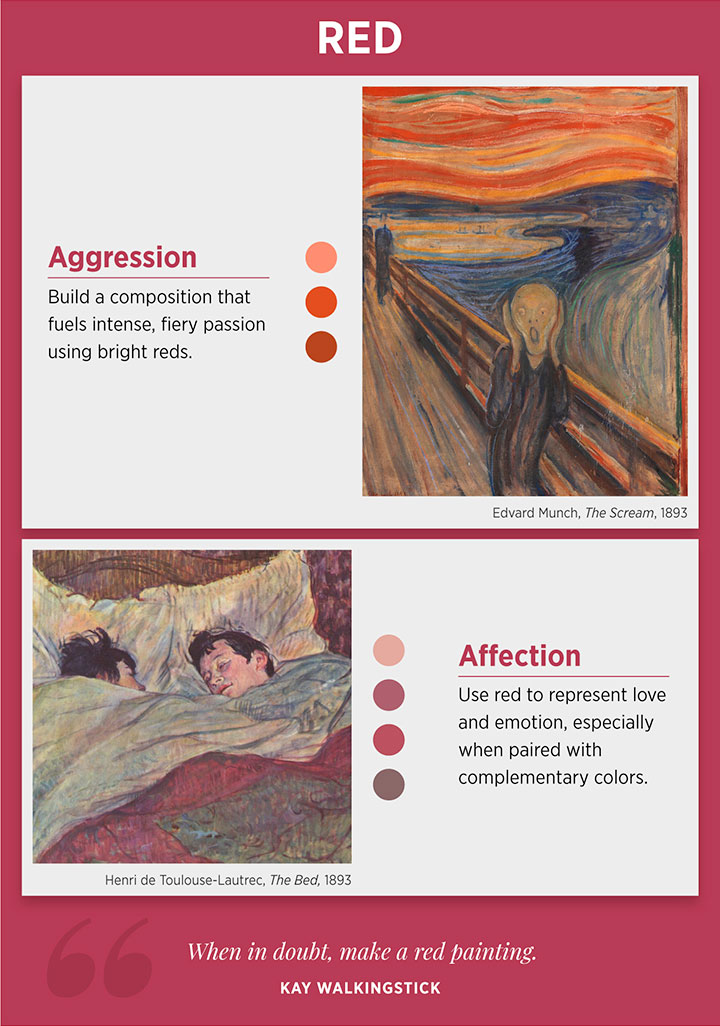 Tints and Shades of Red Meanings

There are some 40 different shades and tints of red, including pink (which we will talk about separately).

Cool reds are pinks, and head towards purple shades.

Warm reds go in the opposite direction towards orange. Think of a salmon color.

A very light red would be FFCCCB with RGB values 255, 204, 203. Since RGB colors are based on light, increasing the green and blue makes the color lighter.

Dark red is less positive and is connected with rage, anger, longing, and evil. But there are some positives such as energy, willpower, and leadership.

Reddish brown shades are a fall color associated with the harvest. They tend to be masculine colors, with maroon being a good example.

This color thesaurus has even more color names for red. 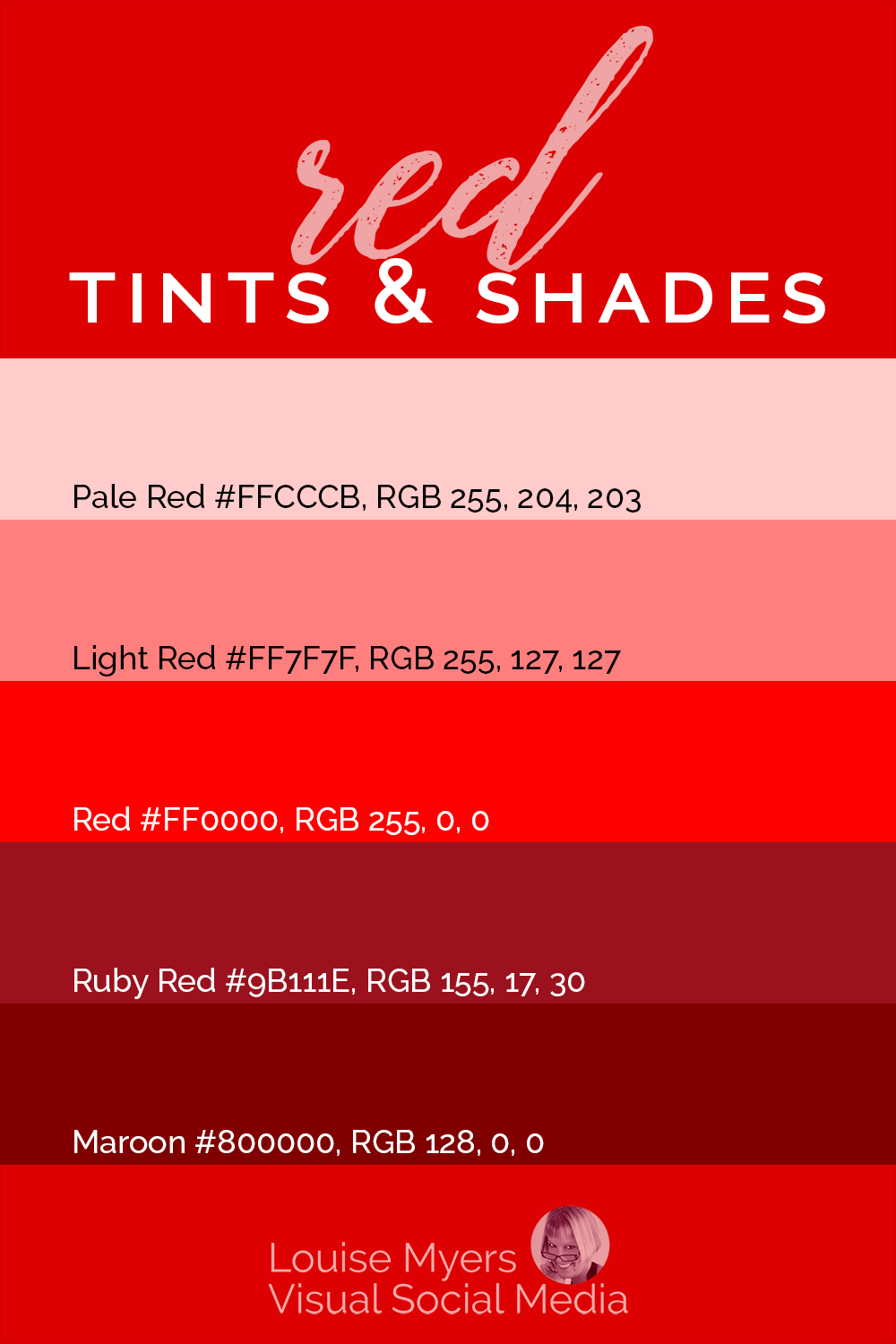 Sayings with Red in Them

There are lots of sayings that use red and relate to how we view the color. Many of them are negative!

Caught red handed – someone who is clearly guilty of something.

Red in the face – when someone is embarrassed.

Not worth a red cent – something that has no value.

Red letter day – a memorable day that sees something happy and joyful happening.

Red tape – processes that have too much complexity for no reason.

How to Use Red in Marketing

For your business, red is a strong color to choose if it matches with what you do.

Red is tied with basic activities and emotions, from blood to meat and the heart.

It is popular with food and drink brands due to the appetite stimulating effect and its associations with heat and fire.

It is also popular for health-related topics and can be seen in things like the Red Cross.

Red conveys strong energy and emotion, so it’s not ideal for brands wanting to project calming or peaceful qualities.

Learn more about using red in your business colors.

Understanding the Meaning of Red

Red has lots of different meanings that change around the world.

It is a strong color that we associate with warnings.

It can also be associated with food, and is popular for fast food companies in their branding.

Read more about color meanings to find out what all the colors mean! 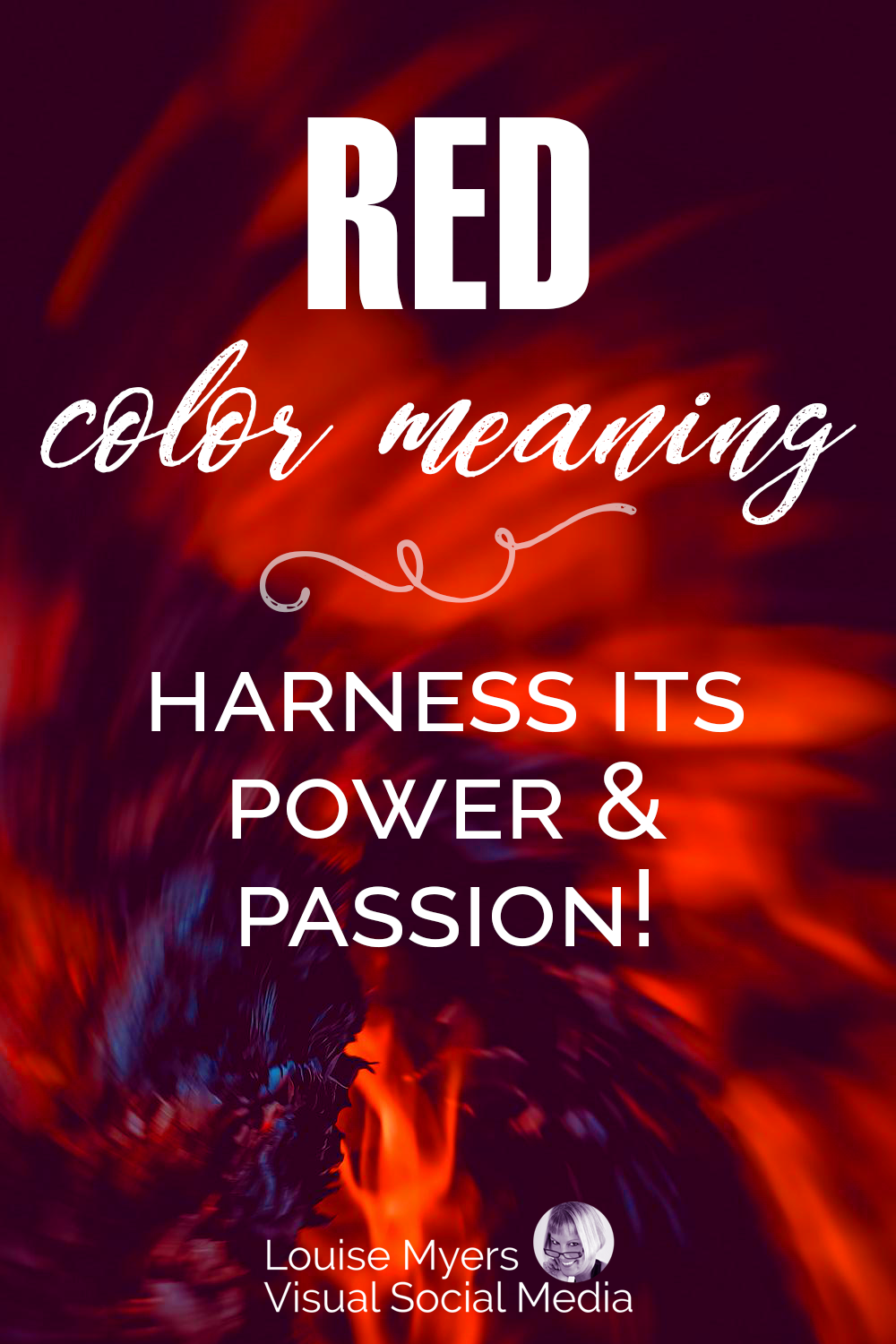