You are here: Home / Color Theory / Blue Color Meaning: This Is How to Tap Into Trust & Tranquility

Want to calm your world with the cool color blue?

Blue is an interesting color that can mean some very different things.

From being traditional and conservative to tranquil or sad, it has both positive and negative associations.

Let’s learn more about the meaning of the color blue so you can use it well. 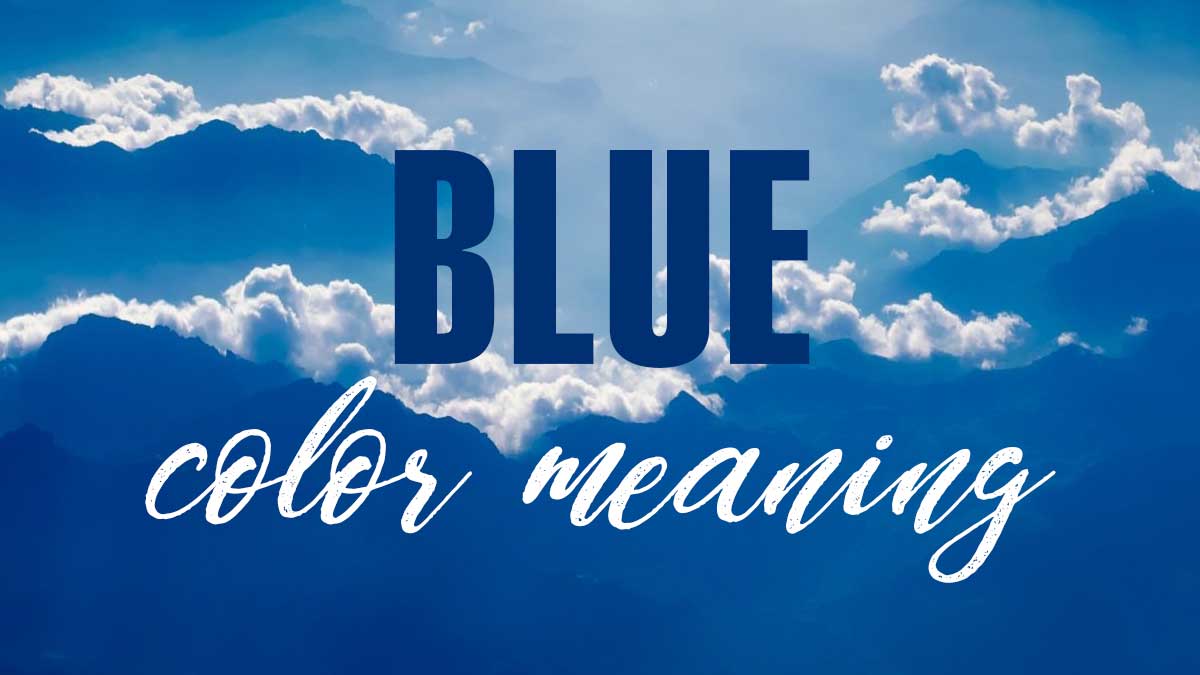 Meaning of the Color Blue

Blue is viewed as a conservative and traditional color choice.

It makes us feel tranquil and peaceful, and can help reduce stress. It even has the effect of reducing heart rate and blood pressure.

It is the color that occurs least often in food, with just a few blue items appearing on the menu.

However, it is also the color of sadness, which is why we “feel blue” when we are upset.

To communicate clearly, it’s important to choose the right shade of blue, and maybe accent colors too. Read on and learn!

How the Color Blue Affects You

Blue is seen as a conservative color and very traditional. This can make it seem non-threatening when people view it.

It is also traditionally preferred by men in everything from clothing to room color. Depending on the study, anywhere from 42% to 57% of men say blue is their favorite color.

Nonetheless, studies also show it to be the top favorite color for women, at 29 to 35% of respondents.

Blue is often described with terms like peaceful and tranquil. It offers a feeling of security and order that helps people feel less stressed.

It also helps boost productivity, and is used to decorate offices for this reason.

Studies show that blue colors can reduce the pulse rate and body temperature. It actually releases chemicals in the body that help us feel calm and tranquil.

Blue is seen as being stable and reliable. This makes it a popular color for companies in their branding.

It is seen as a color of trust and authority. That’s why police uniforms are blue, and why blue power suits are favorites with business people.

Negative Connotations of the Color Blue

On a negative note, blue is seen as the color of sadness. We “feel blue” when we feel sad or down.

Painters will often have a “blue period” when their work is less upbeat.

Blue is also the color we associate with the cold.

Rooms painted in blue can seem cold and uncomfortable, especially if they don’t get much natural light. 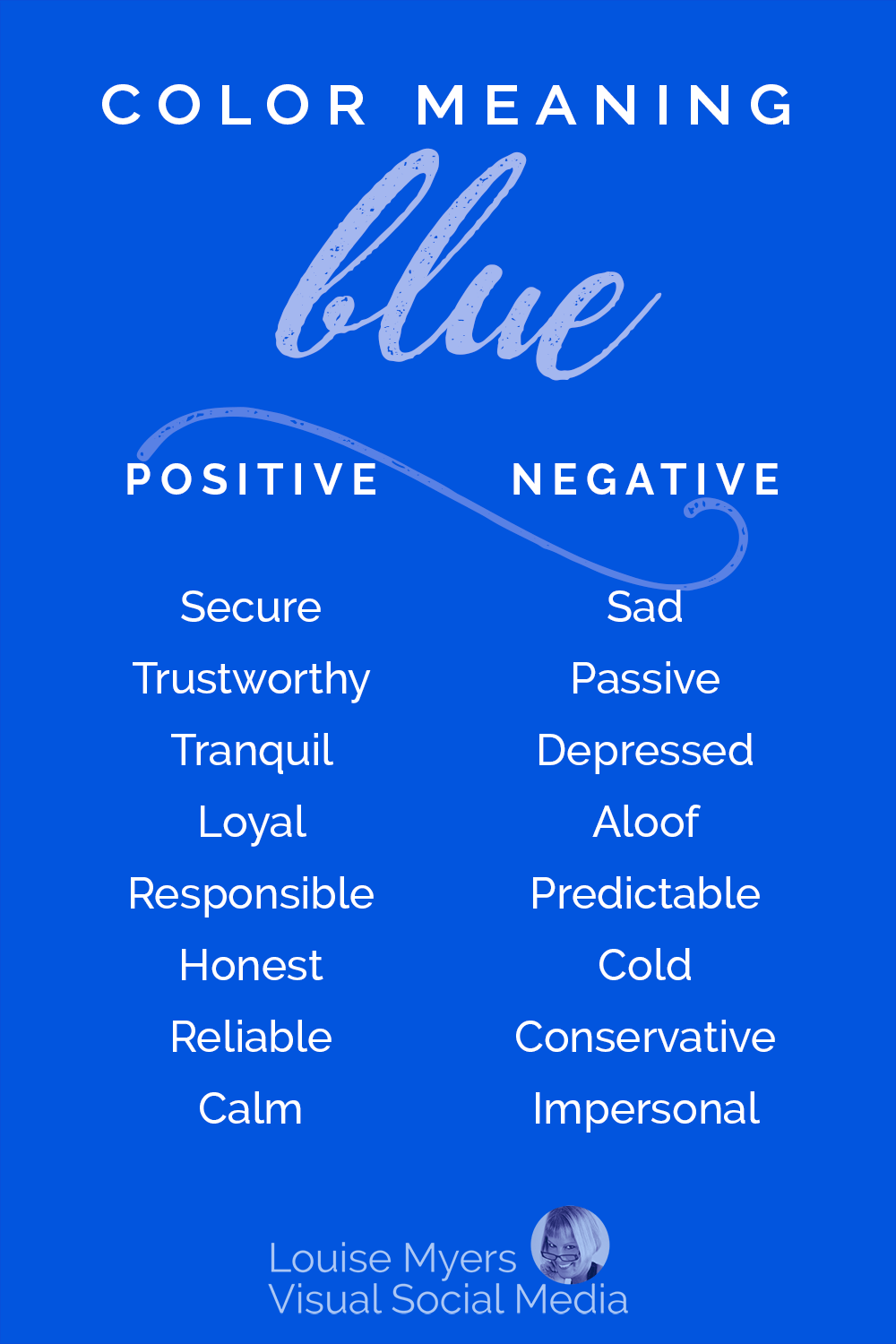 Blue Meanings Around the World

In Eastern cultures, blue is the color of healing and immortality. It is a relaxing color.

The Evil Eye or Nazar is a blue glass bead. Dating back to Ancient Egypt, it was believed to have protective powers.

It is worn in countries such as Turkey, Greece, and Pakistan to bring luck and keep evil away.

It is also a color of safety and protection in the Middle East.

In Ancient Egypt, blue was the color of the sky. Divinity and their chief deity would turn blue to fly across the sky.

In Latin American countries, blue is a sign of hope and good health.

In China, blue is a feminine color, whereas in Western cultures it’s more often considered masculine.

People who have blue as their favorite color are often introspective and deliberate.

They are loyal to a small group of friends and family. They also tend towards a life of service, and have a keen sense of fair play.

Learn more about what it means if blue is your favorite color.

Color Blue Meaning in the Bible

With yellow and red, blue completes the trinity of primary colors.

The color blue is mentioned dozens of times in the Bible. It represents the heavens and God’s divinity.

When the elders of Israel glimpsed God on His throne in Exodus 24:10, it was upon a surface that appeared to be paved with the precious stone sapphire.

Sapphires will also adorn the New Jerusalem, as depicted in Revelation 21:19.

In paintings, the Virgin Mary is usually shown wearing blue. One reason for this is that the color was tied with fidelity and tranquility.

The second was that ultramarine blue was expensive to buy so it was chosen for the most important parts of the painting. Authentic ultramarine pigment was made from the blue semi-precious stone lapis lazuli, and actually cost more than gold.

In the Roman Catholic church, bright blue symbolizes Mary, who is known as “the Queen of Heaven.” 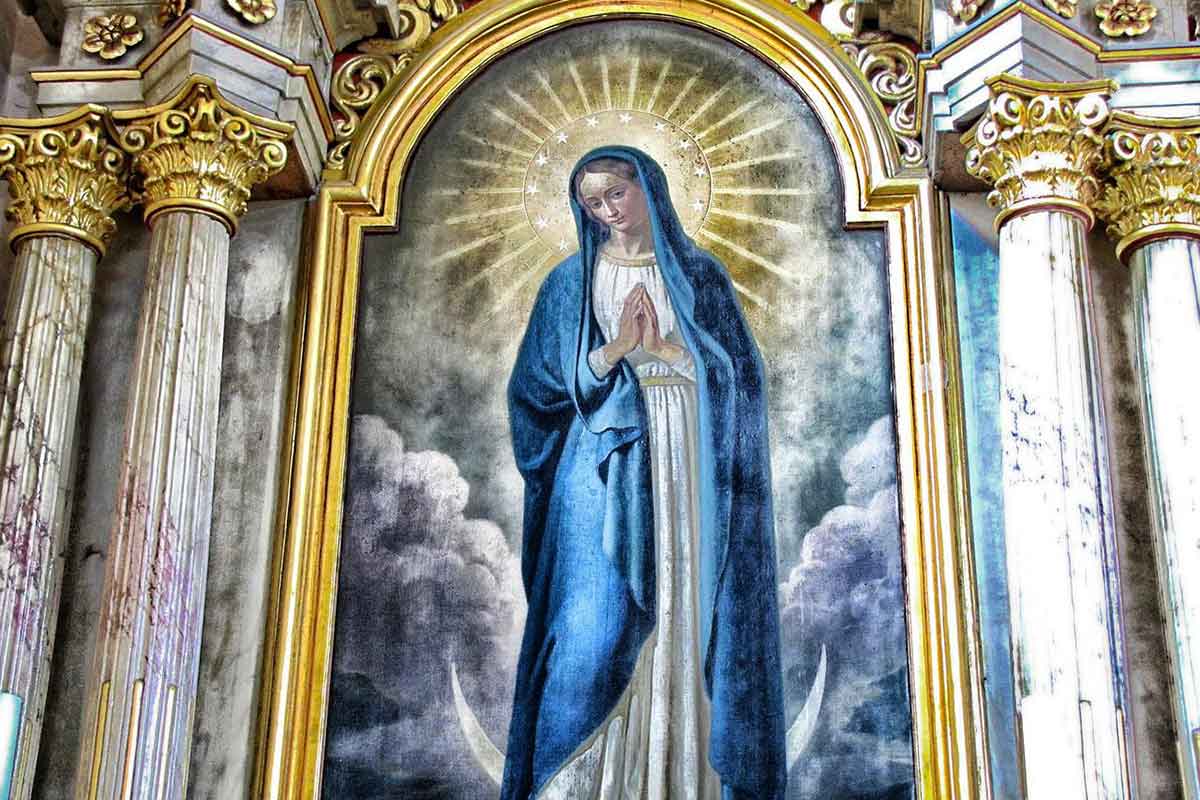 Other Spiritual Meanings and Symbolism of Blue

Blue is the color of the throat chakra, Visuddha. This is found at the throat and is associated with speech and hearing.

It can be paired with blue gemstones such as lapis lazuli or sodalite to aid it.

In Hindu beliefs, some of the most important gods have blue skin, including Vishnu and Shiva.

It is most associated with Krishna, where it is connected with love and joy.

Blue is often used with warm colors like yellow and red for high impact designs. That’s why we often see these kinds of combinations in superhero outfits!

The stability and trustworthiness of the color are why the Jedi have blue lightsabers in the Star Wars films.

Soft blues can create a calming effect, as Monet depicted in Water Lilies.

Deep, grayed-down, monochromatic blues evoke feelings of sadness and aloofness. See how Picasso used them in The Old Guitarist.

Beware of dull, monochromatic blues unless you intend to create this mood. 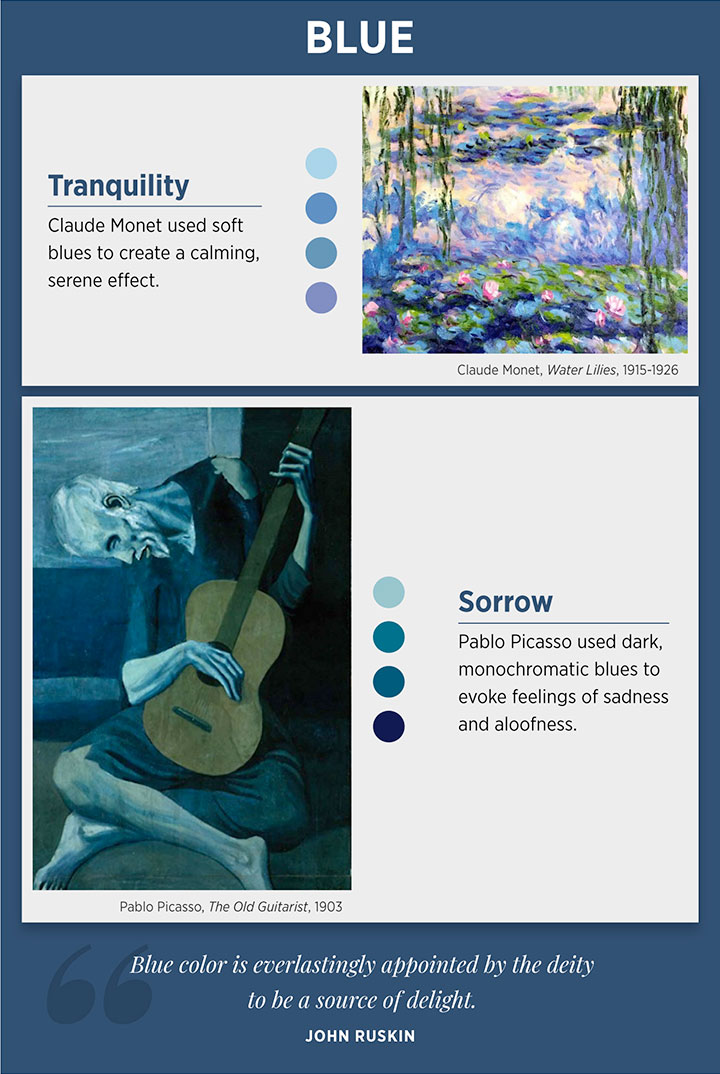 Tints and Shades of Blue Meanings

Blue shades and tints run from pale colors through to very dark shades like navy blue. Then there are greenish blues, like turquoise.

The softness of the shade means it is used where healing takes place.

But it can also be associated with trustworthiness and reliability.

Electric blue is a bright shade that only started to be used in the mid-1800s.

It came from the color of the air when electricity was created. It is now associated with lightning and anything “electric.”

Midnight blue is a very dark shade and is associated with conservatism and authority.

Dark blue is a favorite shade for corporations in the U.S. That’s because it is tied in with expertise, stability, and depth.

It is also seen as the color of knowledge and seriousness, and is used in the Australian national flag.

Royal blue is associated with the British royal family. It is also used in many uniforms as it is a color of trust and authority.

You can find many more blues in this compilation of blue hex codes with pinnable chart.

Or, this color thesaurus has 20 color names for blue. 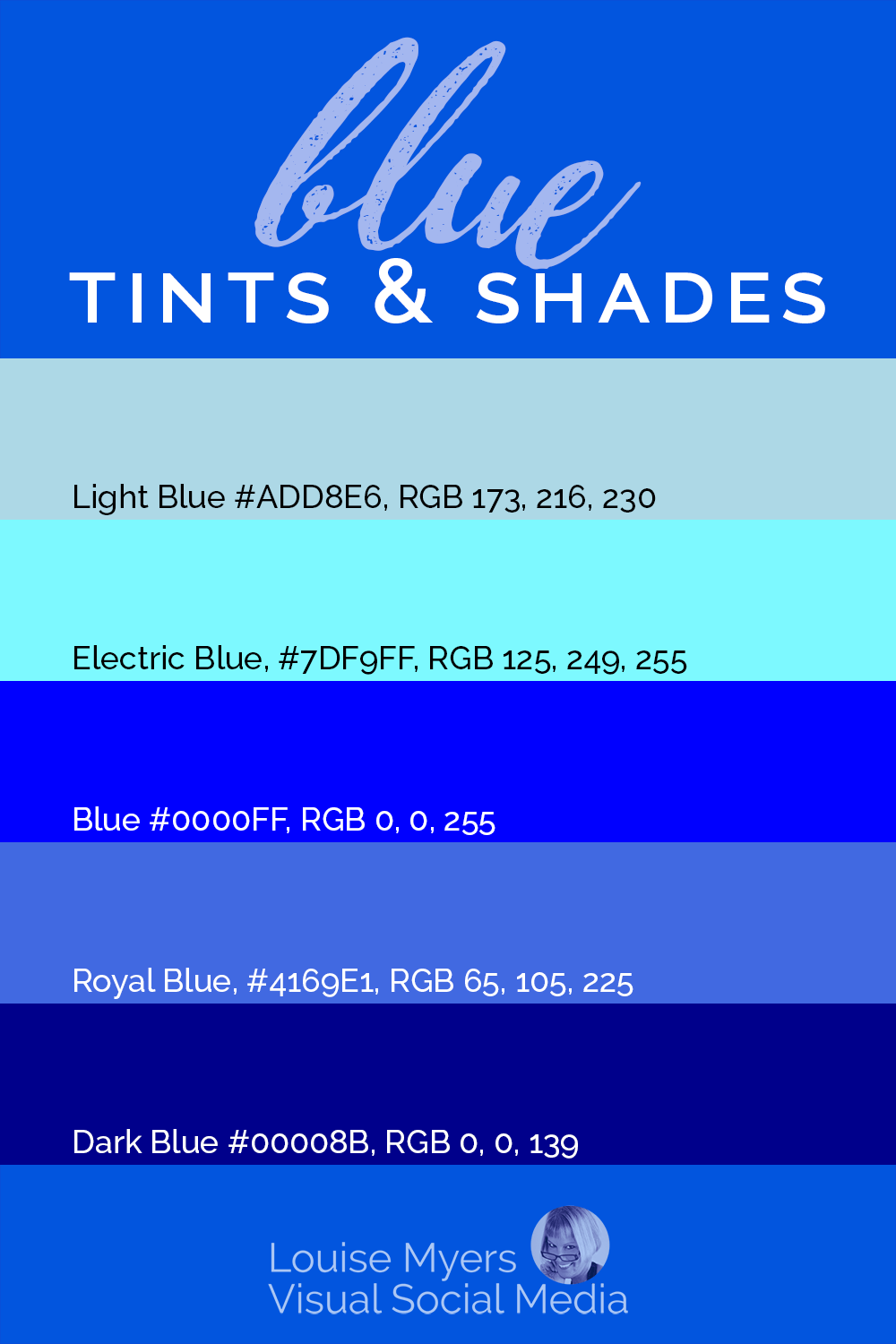 Blue is used in many phrases highlighting the different positive and negative meanings. A few examples include:

Out of the blue – when something happens unexpectedly.

True blue – someone or something loyal and faithful.

Once in a blue moon – something that only happens very occasionally.

Blue plate special – a meal with a special price at a restaurant.

Blue laws – these were laws used in the US to “prohibit morally objectionable behaviors” on a Sunday, such as gambling and commercial activities.

How to Use Blue in Marketing

Blue is the most commonly used corporate color in the world. Around 33% of the most valuable brands have a blue logo.

It is also popular for flags, with around 50% of the countries of the world featuring blue in some way.

It is associated with water, and is common in brands offering refreshing drinks.

The clean and pure association also means it is popular for healthcare brands. And because it is likable and the color of business, many social media companies use it.

However blue isn’t the best bet for food companies, as the color can suppress the appetite.

Check out more about business colors for branding inspiration.

Understanding the meaning of blue

Blue is an interesting color that has some diverse meanings.

We associate it with tranquility and serenity – but also with sadness and depression.

Is indigo blue or purple? Get the scoop on that in-depth article.

Want the whole rainbow? Learn more about all the color meanings. 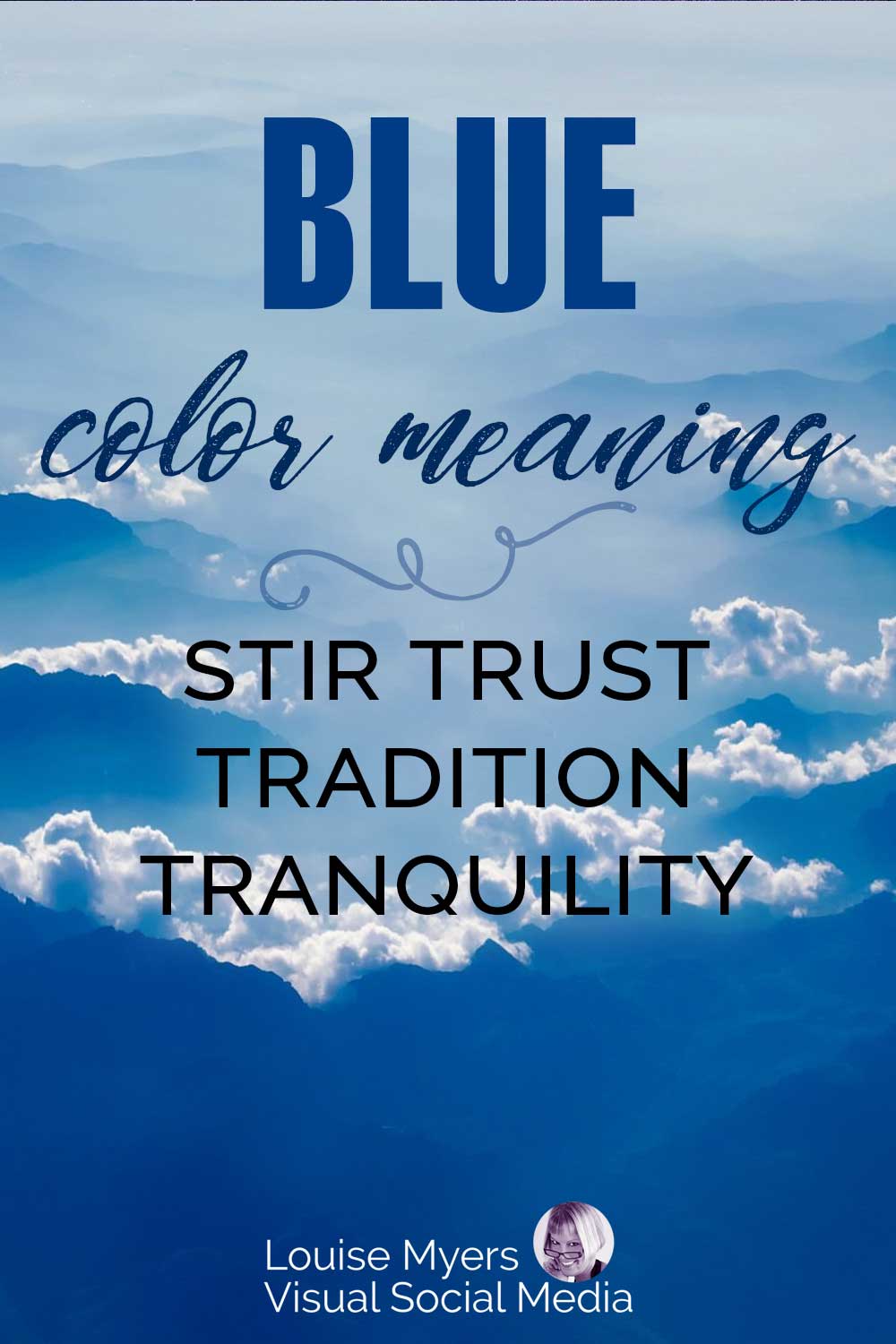