You’ve only got a tiny sliver of time to grab someone’s attention with your tweet.

Why? The average Twitter user session is just over 3 minutes!

How do you get seen? Well, the content is a big one. But when you post is super important.

Let’s dive into when is the best time to post on Twitter to make the most of those three minutes. 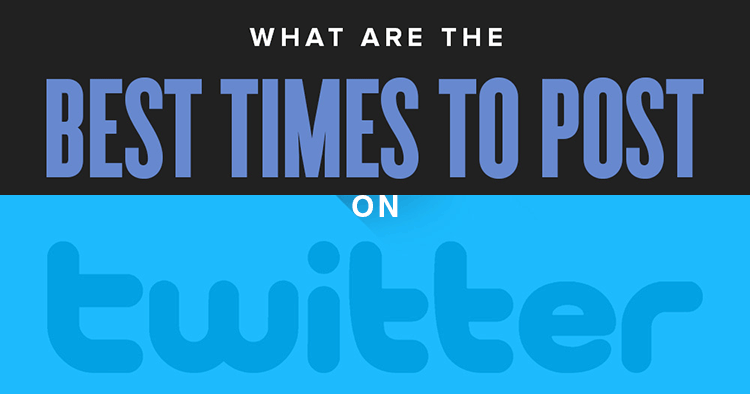 Once you have a few followers, it can be like the ticker tape on a TV news channel. There’s this constantly changing flow of tweets.

Let’s put it into some context about tweet numbers. There are:

Kind of sounds like there’s no chance you can get your stuff seen, right?

Then fine-tune that for your own audience.

Ask lots of people when the best time to tweet on Twitter is, and they’ll say there is no best time.

That’s not strictly true. There are windows when Twitter users are more active.

The most popular time to tweet is between noon and 1pm local time. At the other end of things, it is quietest from 3am to 4am.

You’ll find the most activity on Twitter from 11am until 1pm each day. Note that this is a worldwide average, so it could vary if you’re trying to reach a specific time zone.

By time zone, the most popular times to tweet are:

These stats are according to a study of 4.8 million tweets from Buffer. Do remember that while most tweeps are active during these popular times, it also means you have more competition – so keep reading.

These are the times that see the most engagement, from a study by Sprout Social:

This info is reflected on their chart below, in Central Standard Time (CST). But this represents averages of their 20,000 customers. Please continue reading to learn how to find your own best times to tweet. 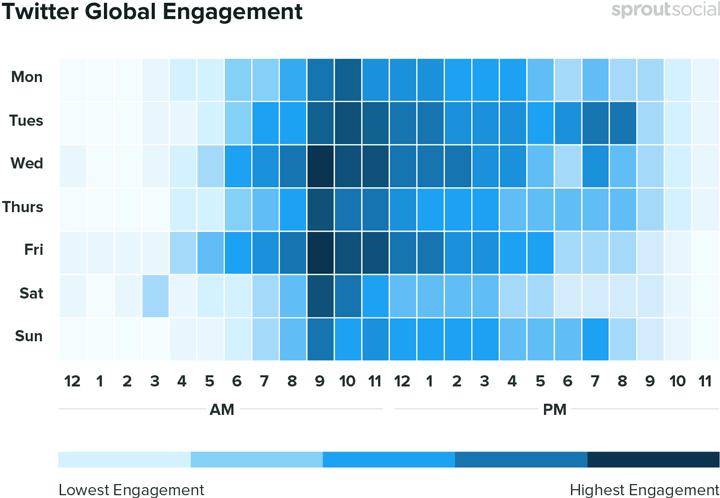 What Are the Best Times for Different Types of Engagement?

With every tweet, you should have some ideas about you want it to achieve.

Do you want likes? Retweets? Clicks?

Are you mentioning someone and want to grab their attention?

Another helpful part of planning your time to post is to look when certain types of engagement do best.

Because Twitter is so heavily monitored, we have some interesting facts. Here’s a few about timing:

Who your audience is and what you tweet about plays a part. For example, there’s a difference between B2B (business to business) and B2C (business to consumer) blogs and businesses.

The following times are figured in Central Standard Time zone:

Or a few examples by industry (also CST):

How to Use Twitter Analytics to Find your Best Days

But how about finding out some data for your audience?

To start with, you can use the Twitter analytics to find out some basic data about your account. Go to the ‘more’ option at the bottom of the menu and you can access it there.

There isn’t as much data here as with Facebook or Instagram. But you can see a pattern of your recent tweets and see if certain days saw more engagement.

But overall, the stats are pretty limited. There’s not a chart of your engaging times, or even where your followers reside.

Using Tools to Find the Best Time to Post

While Twitter may not have the best built-in analytics, there are some dedicated tools for the job.

Oops! Tweriod seems to have shut down. If you can’t find them at Tweriod.com, scroll past this section to learn about Followerwonk and Missinglettr.

Tweroid is a free tool (that does have an upgrade option) that finds the best time to tweet from your own account.

It analyzes the data and looks at the last 1000 followers on your account.

It then offers times and days when best to tweet.

It breaks the information down to weekends, weekdays, Sundays, and Mondays.

Plus, it shows activity by the hours for the four different time frames.

Followerwonk is another free tool with an upgrade plan.

It assesses data from your account – or someone else’s.

It provides the most active hours for your account’s followers.

Plus, there’s a graph on your account’s most active hours. Match these up to be sure you’re tweeting when your followers are active.

There’s even a ton of extra data, to help understand your audience. Or spy on the competition! 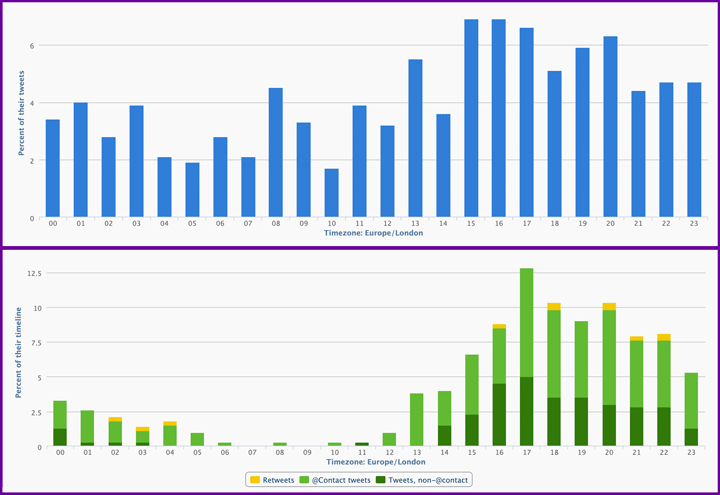 The reason I use and love this tool is that it was created specifically for bloggers! It automatically creates custom tweets with images every time I publish a blog post.

And, they just added fabulous analytics!

Because it’s designed for bloggers, they show you where and when your clicks are coming from.

I mean, when followers are online tweeting and mentioning you is lovely but I want clicks!

Below, you can see the handy graph that shows the data based on clicks.

This is a great way to get up to date information for your own account.

If you’re a marketer of any kind, I think you’ll find this useful! I’m an affiliate for Missinglettr and may earn a referral fee if you purchase a plan.

But there’s more information out there than you might think!

By using your account, third party tools, and a few general tips, you can create a schedule.

Then you can use analytics on Twitter to see what’s working, and tweak it from there.

Like to take it all in visually? Check out the infographic from QuickSprout below. Pin it as a reminder!

Remember, you can find your own account’s best time to tweet easily with Missinglettr.