You are here: Home / Color Theory / Purple Color Meaning: How to Use This Royal, Unique Color

Want to use the color purple more meaningfully?

Then you need to learn about the color meaning of purple!

Purple is a color of mystery and has both positive and negative associations.

It is connected with royalty and seen as a color of wealth. But it can also be seen as associated with unique and exotic things.

Let’s learn more about the meaning of the color purple. 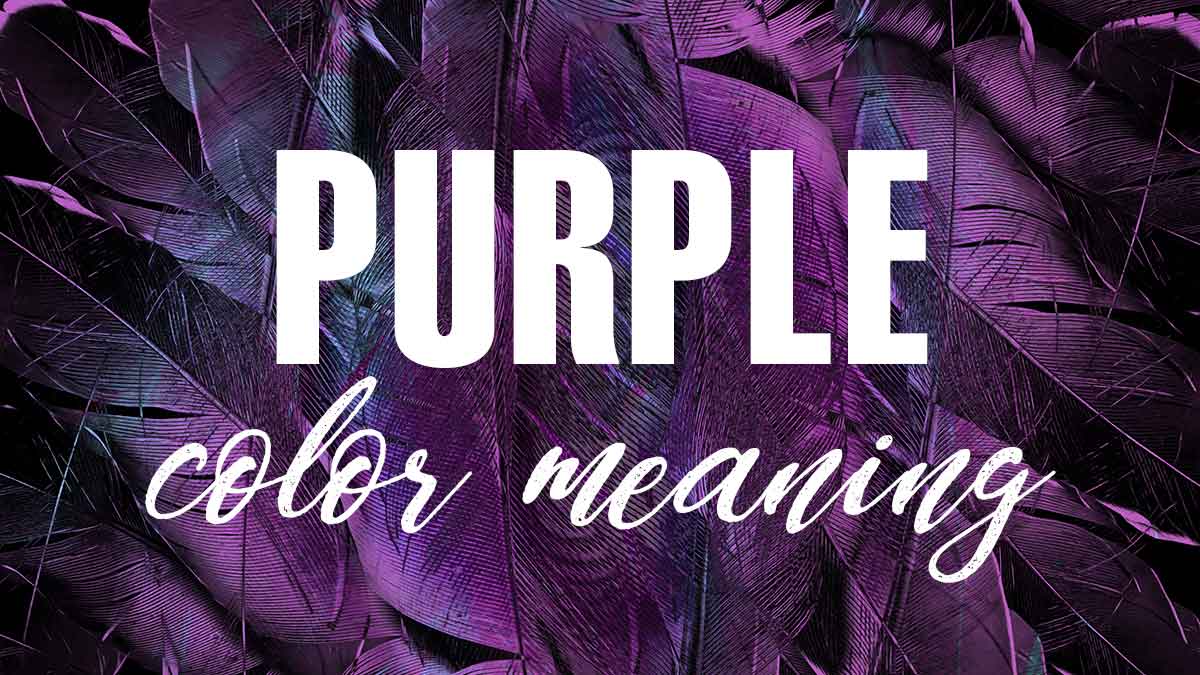 Meaning of the Color Purple

Purple is seen as a color of wealth and nobility. It’s also connected to the supernatural, the unknown, and the divine.

Purple is often viewed as being connected to the unique and exotic, as well as outer space.

Read on for more!

How the Color Purple Affects You

Purple has some strong meanings, and also ways that it can affect people.

There’s no doubt that one of the strongest associations with purple is with royalty.

This comes from ancient times when purple dye was very expensive. Only royalty or the very wealthy could afford it!

This association has continued throughout history. Even Queen Elizabeth II wore a Purple Robe of Estate to her coronation in 1953.

Purple is connected to the unknown, supernatural, or divine. This leads to connections with wisdom and bravery.

The Purple Heart is one of the highest awards for bravery in the US military service, showing this association. 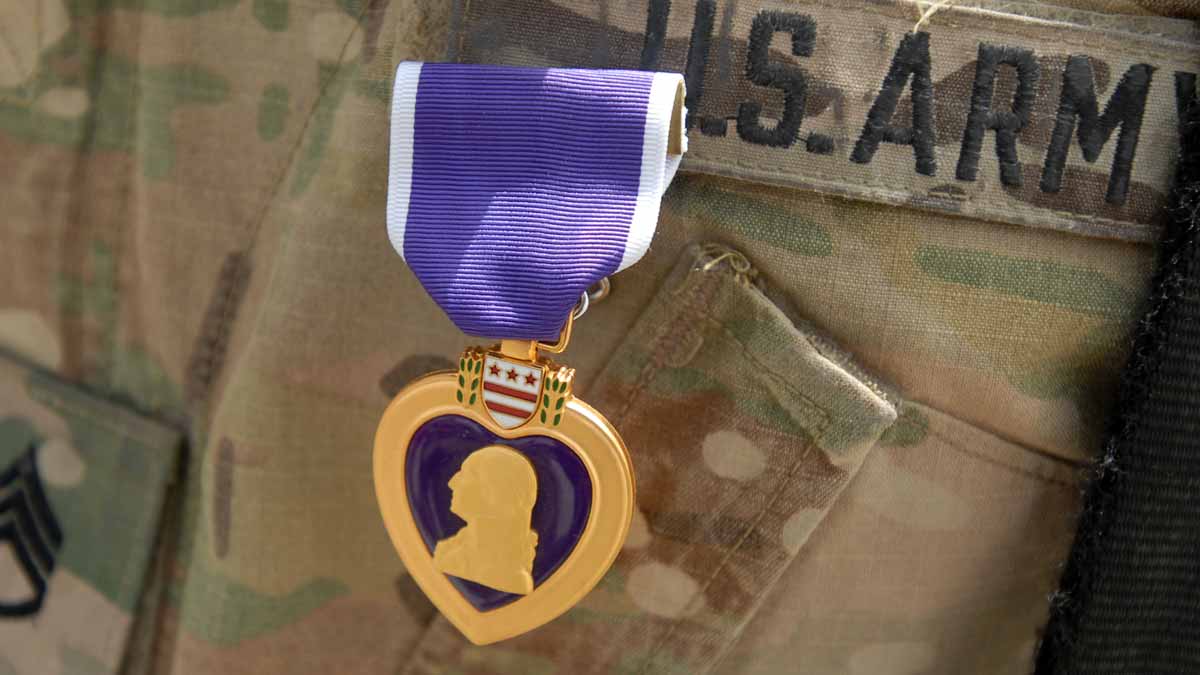 Some of this comes from it being one of the harder colors to see.

That’s because purple light doesn’t exist! It would be beyond the far end of the visible spectrum, ultraviolet. Purple is created visually by seeing red light and blue light simultaneously.

Negative Connotations of the Color Purple

Because purple is a mixture of passionate red and calming blue, it is sometimes seen as a non-traditional color, and thus unstable.

That impact of mixing the colors can even be seen somewhere like in Star Wars!

The purple lightsaber sits between the good guys and the bad guys, and is often used by people who are a little morally uncertain.

The connection with royalty often makes it a negative color for people with democratic beliefs. It can be connected with feelings of arrogance and being condescending.

It is also sometimes seen as the color of mourning and death, and can signify sadness. 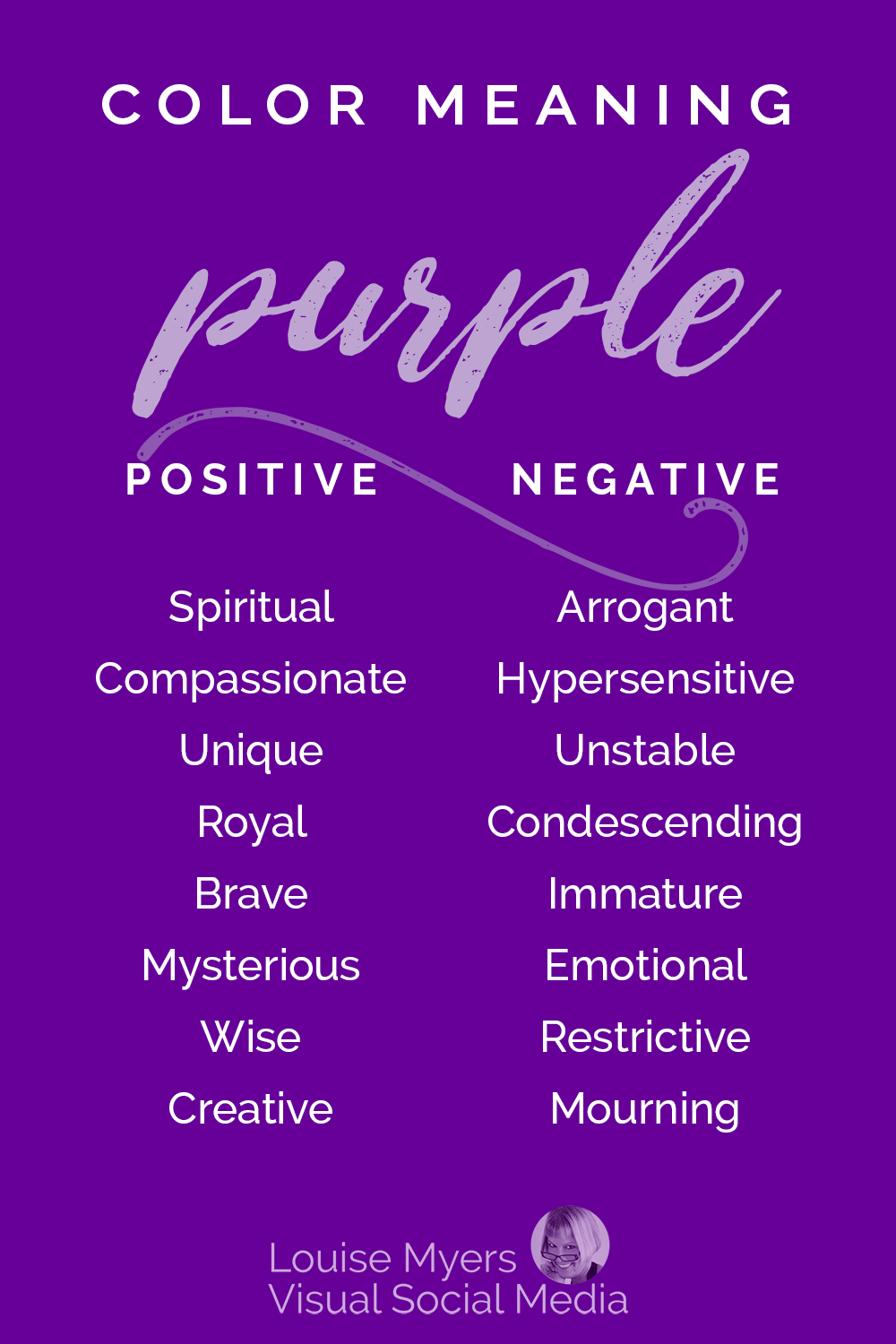 Purple Meanings Around the World

In many Asian countries, purple is seen as connected with nobility. The exception is Thailand where it is a color of mourning.

In the Middle East and Africa, it represents wealth.

In Latin and South American countries, it’s seen as being associated with mourning and death.

Purple isn’t a common color for flags worldwide, and currently, only Dominica uses it in theirs. It’s a minor accent in the Sisserou parrot portrayed. 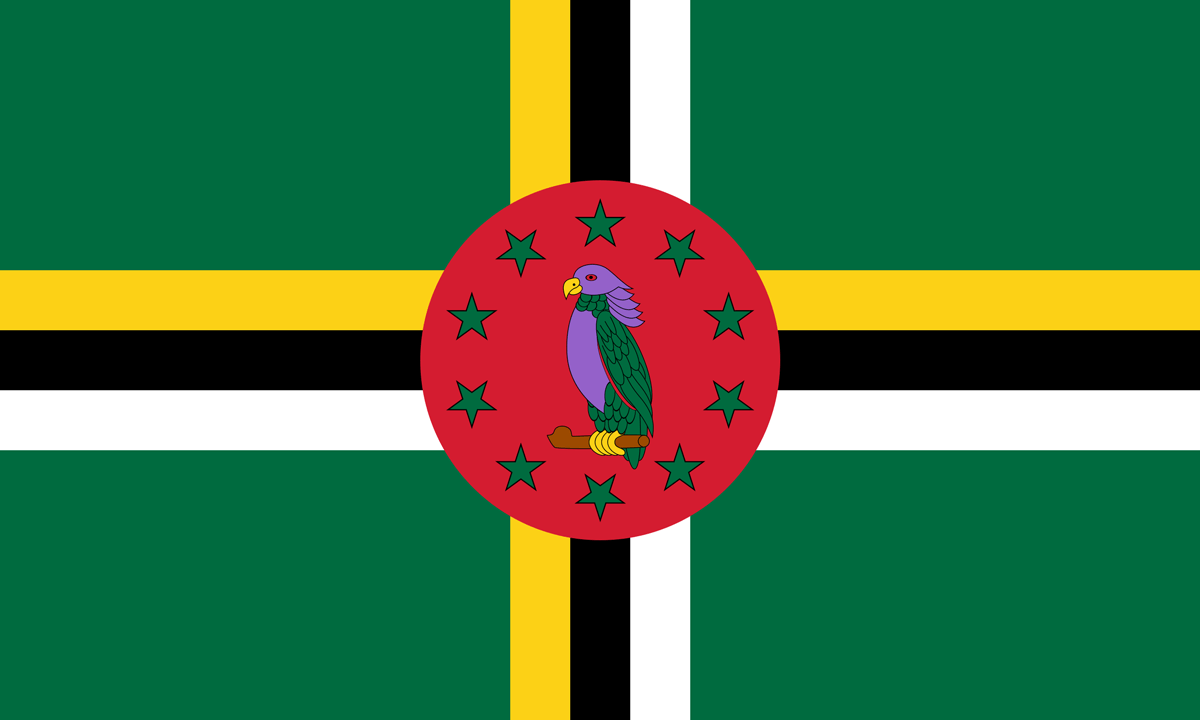 People who love purple are often perfectionists – but are also there to help others. They have strong intuition, and there’s a good chance what they feel is correct with their instincts.

They also have a creative side that is contagious, meaning they are well placed to bring a team of people together.

Read more about what it means if purple is your favorite color.

Color Purple Meaning in the Bible

In the Bible, purple has the same connection with wealth and royalty as for many other cultures. It would sometimes refer to a royal line, such as when the Byzantine Emperor Constantine VII was called Porphyrogenitus. This means ‘born of the purple room’.

Purple was used in the temple in the Old Testament for curtains and carpets as well as garments worn by the High Priest.

In today’s Catholic Church, purple reflects sorrow and suffering, so vestments of this color are worn during Lent.

As a symbol of royalty, purple is worn during Advent, when Christians await the coming of the newborn King, Jesus. Purple candles are lit to count down the weeks to Christmas.

Other Spiritual Meanings and Symbolism of Purple

Shades of purple are associated with two of the chakras.

Indigo, a purplish blue, is connected with the sixth chakra, Ajna. It is found between our eyes and is often referred to as the ‘third eye’.

Violet, a bluish purple, is associated with the crown chakra, Sahasrara, which is found at the crown of the head.

People who are said to have a purple aura are believed to have connected to their spiritual path and found their purpose. These people are often energizing to be around.

Is indigo purple? Get the scoop in that deep-dive article. 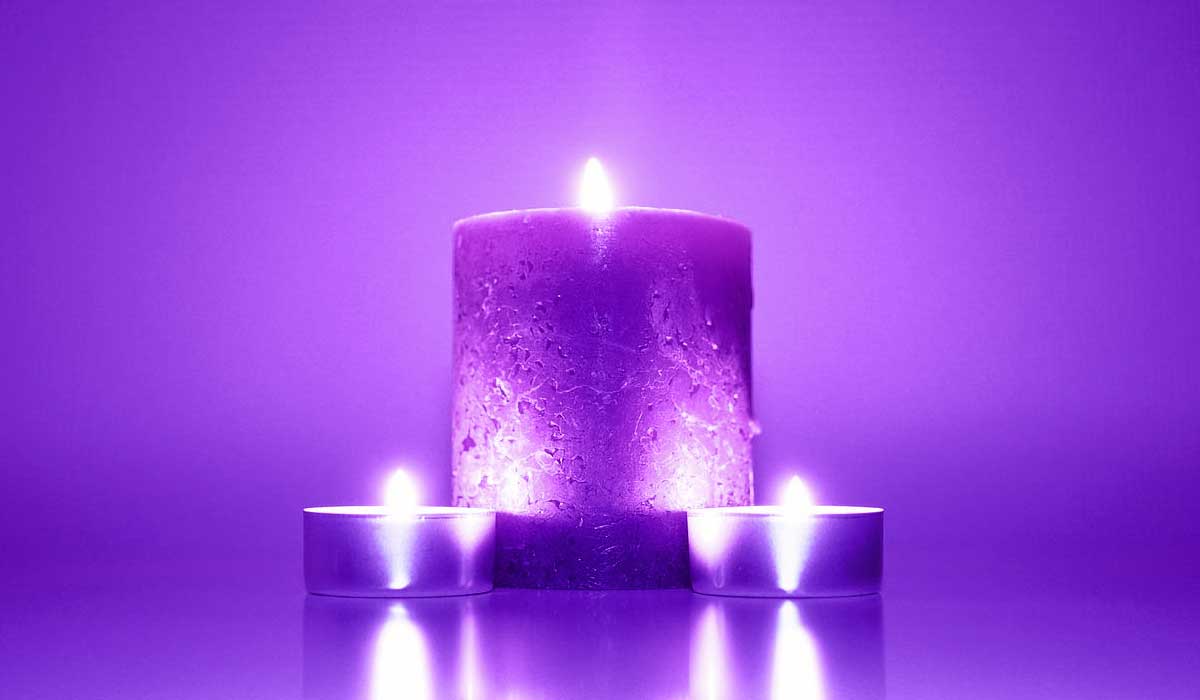 Purple is often used when you want to convey luxury, especially in rich, dark shades.

Its air of mystery makes it popular in designs dealing with fantasy and science fiction topics.

One of the most famous artists who used purple a lot was Monet. This includes his Rouen Cathedral series of paintings.

Matisse, Andre Derain, and Rothko were all known to favor purple as well.

Purple is reputed to awaken creativity and imagination. Check out how Paul Signac used tints and shades of purple in the painting below. 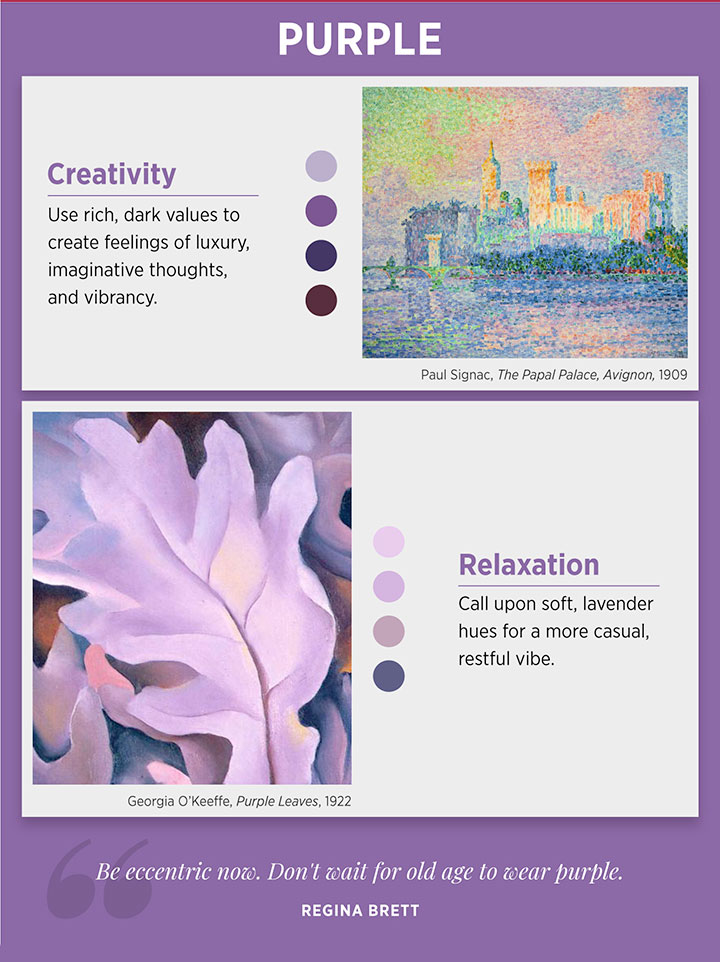 Tints and Shades of Purple Meanings

There are lots of shades and tints of purple that have different meanings than the basic color.

Lavender is seen as a feminine shade, yet more sophisticated than pink. It is a color of compassion and is associated with peace.

Lilac is a soft pinkish purple that is associated with innocence, nostalgia, and youth.

Most light tints of purple are considered to be calming and ideal for people who are stressed.

At the darker end, Violet is at the end of the visible light spectrum. It’s associated with creativity, confidence and individuality.

It is seen as associated with wisdom and higher knowledge, but also frustration and sad feelings. 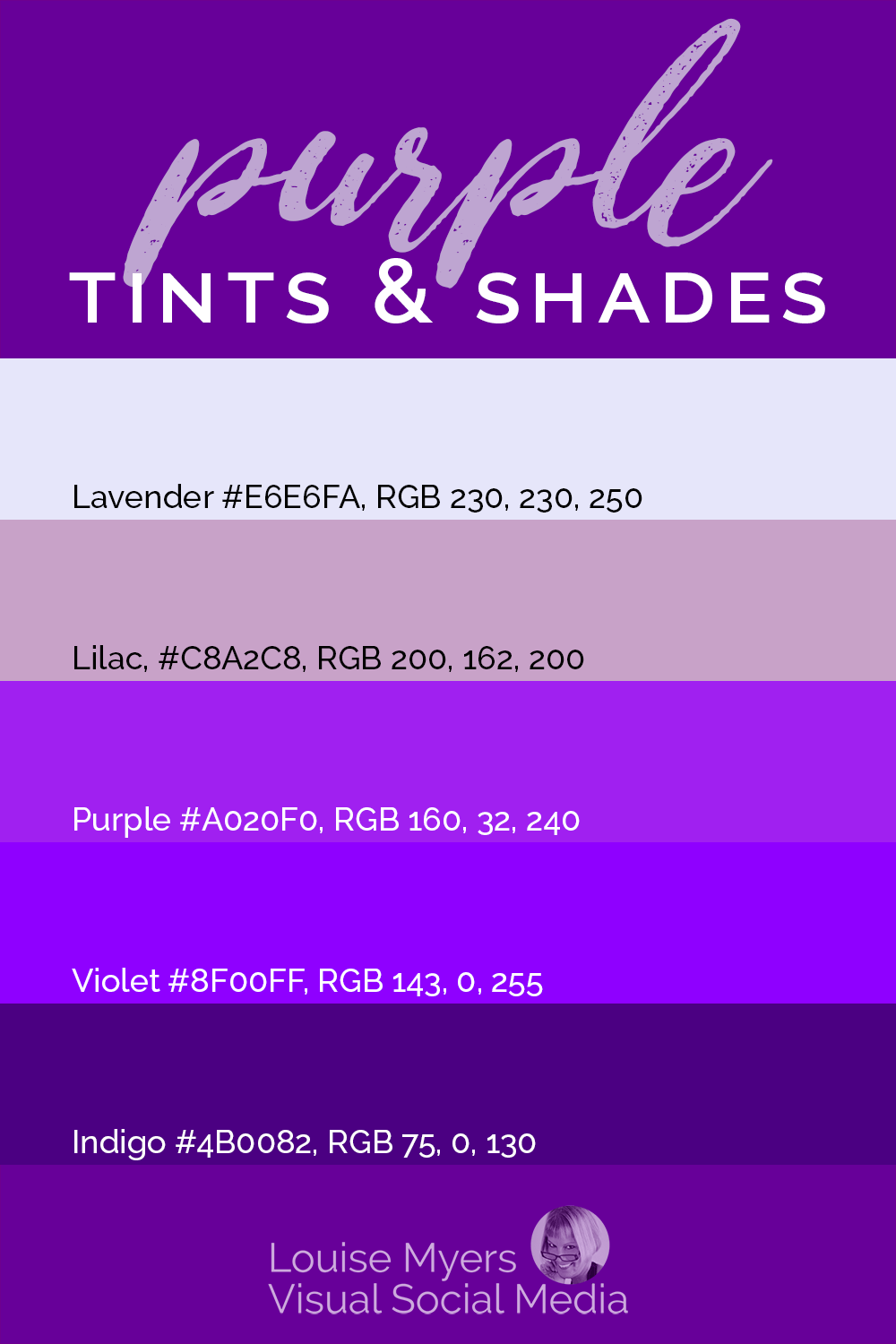 The color meanings for purple initiated various sayings relating to the color. A few of the most well known include:

Having a purple patch – means having a lot of success of good luck.

Born to the purple – born into royalty or wealth.

Purple time – in Formula 1 racing, the fastest time of the session so far.

Purple prose – to use flowery or overly elaborate language.

Purple state – (US) a state that is roughly split between the Democratic (symbolized by blue) and Republican (red) parties.

Purple crying – in babies, this stage begins at about 2 weeks of age and continues through 3 to 4 months of age. In this case, PURPLE is actually an acronym! The baby doesn’t turn purple (hopefully!).

How to Use Purple in Marketing

As a branding color, purple is often used for feminine businesses.

It is also common in technology niches such as search engines like Yahoo.

The association with wealth and royalty also makes it popular for financial companies.

Brands that are luxurious and at the higher end of price ranges sometimes choose purple for the same reason.

Explore more about business colors and find where purple fits in.

Understand the meaning of purple

Purple is a color with clear meanings and a lot of history.

It is also connected with less tangible things and has a lot of spiritual connections.

While it is a combination of red and blue, it is mostly seen as a feminine color.

Pin one or more of my graphics to Pinterest to remind you of the many meanings and shades of purple!

Then learn all the color meanings and how to use them! 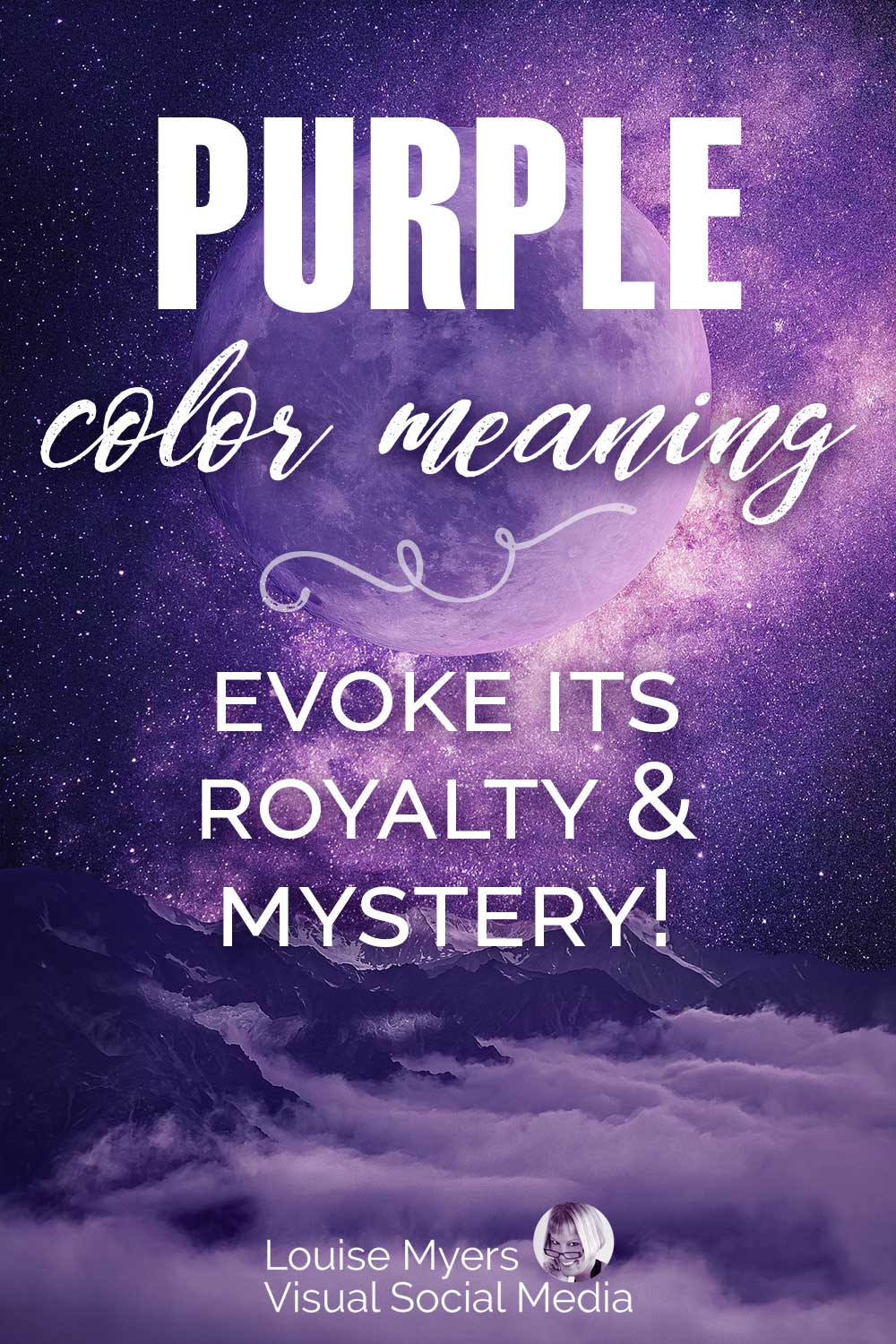