You are here: Home / Business Tips / How to Get Inspired: Success Quotes That Make It Happen 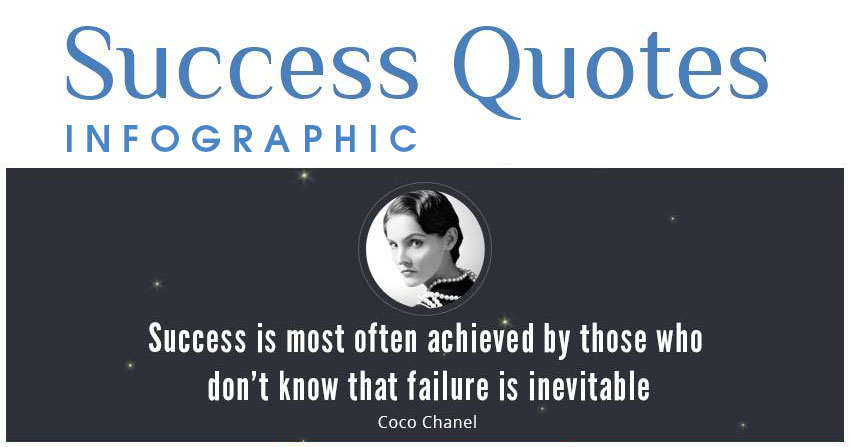 Wondering how to get inspired?

Check out these famous success quotes to get – and keep – you on track!

One colorful infographic, plus 17 quote graphics you can pin to Pinterest.

All in all, more than 60 quotes in all the categories you love:

Read on and enjoy! 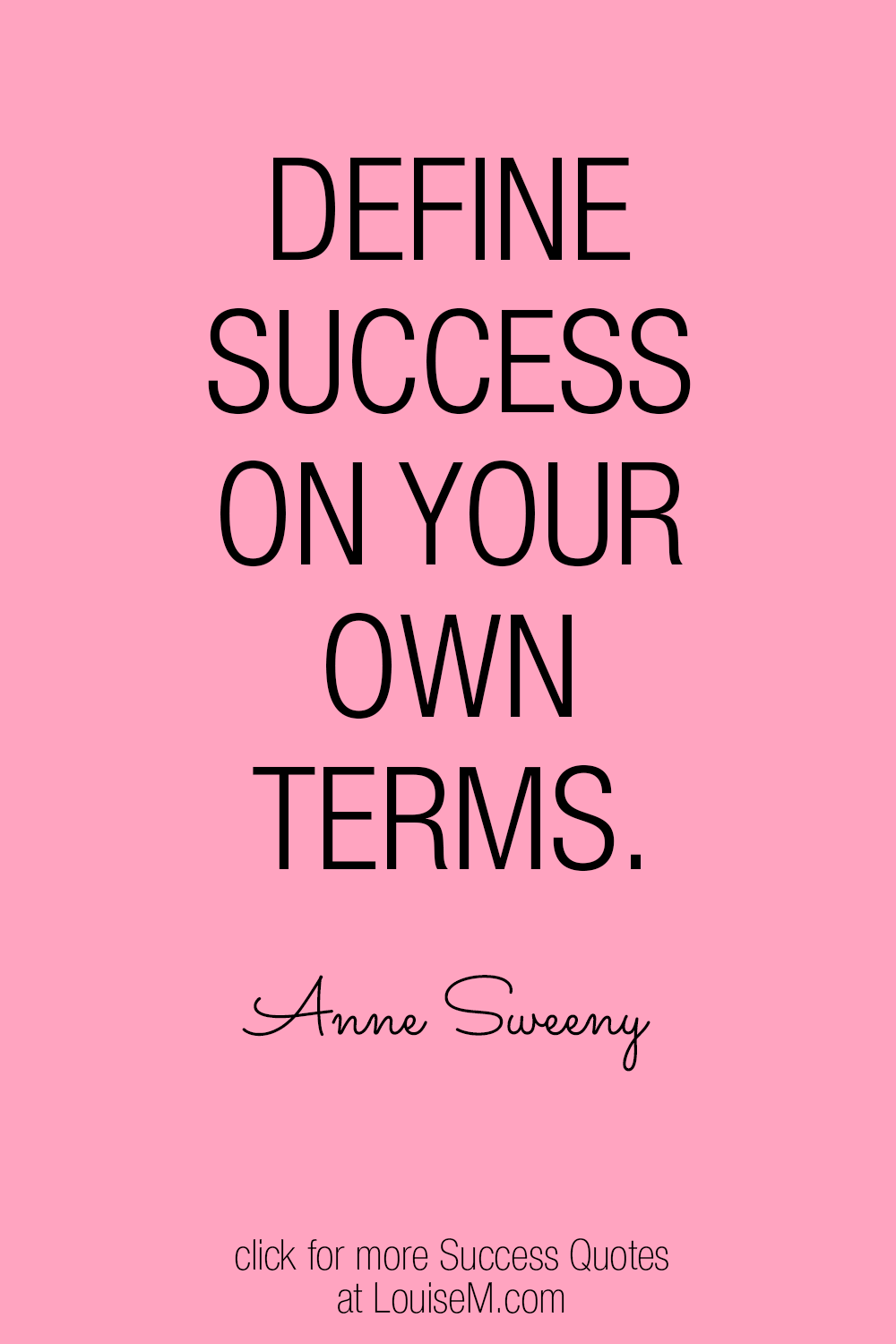 Define success on your own terms, achieve it by your own rules, and build a life you’re proud to live. ~Anne Sweeny

Women are the largest untapped reservoir of talent in the world. ~Hilary Clinton

A confident woman, a woman who truly knows her worth and her power is a force to be reckoned with. ~Mandy Hale

I think the key is for women not to set any limits. ~Martina Navratilova

Be the kind of woman that makes other women want to be you. ~Topaz 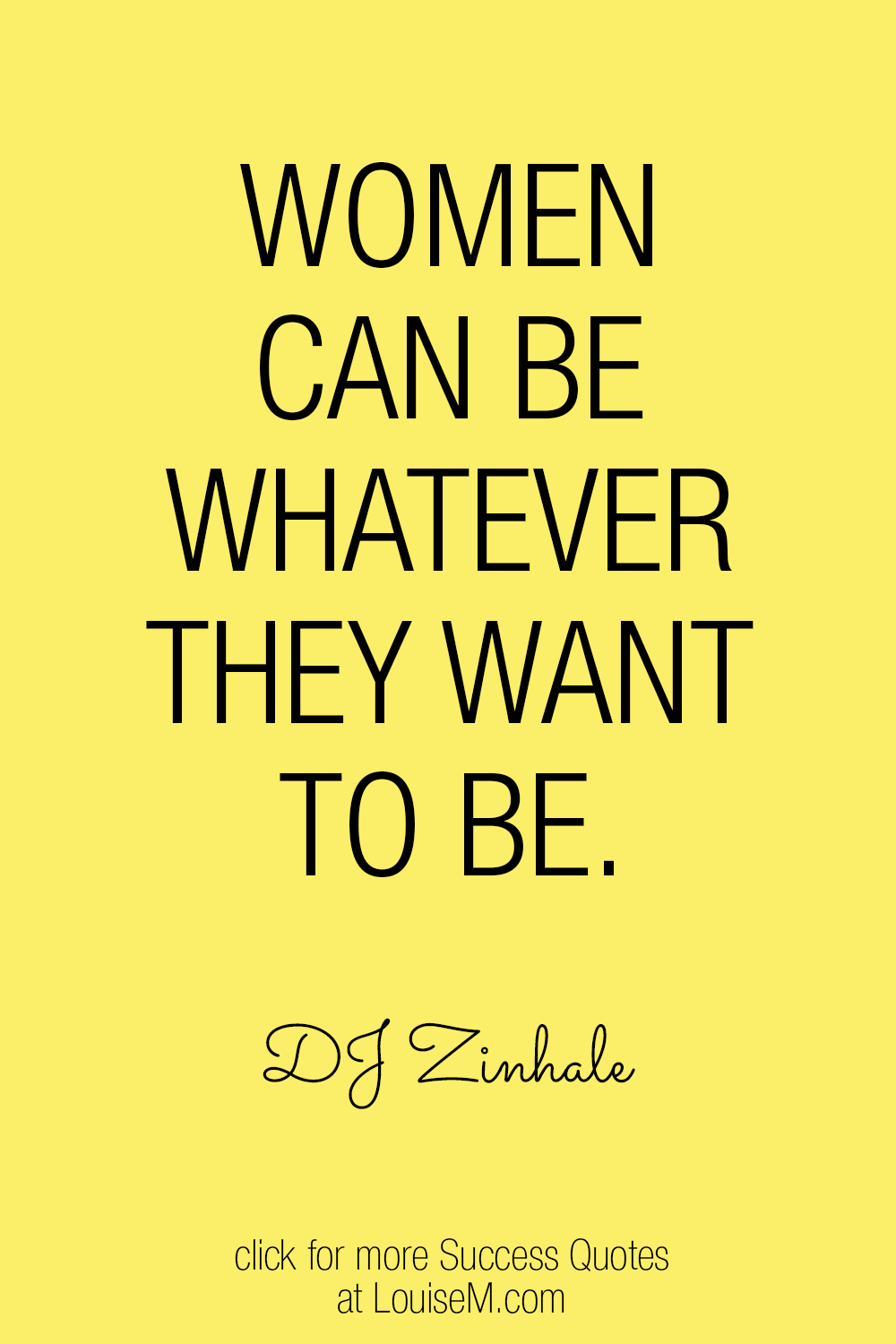 Women are as capable as men and this needs to be the focus of our education, that women can be whatever they want to be. ~DJ Zinhale

Being a woman in business doesn’t come without challenges. My advice? Surround yourself with other supportive women that encourage you, share ideas, and get you motivated. ~Jessica Alba, Founder of The Honest Company

Honor your calling. Everyone has one. Trust your heart, and success will come to you. ~Oprah Winfrey

Happiness is the gradual realization of a worthy ideal or goal. ~Florence Nightingale 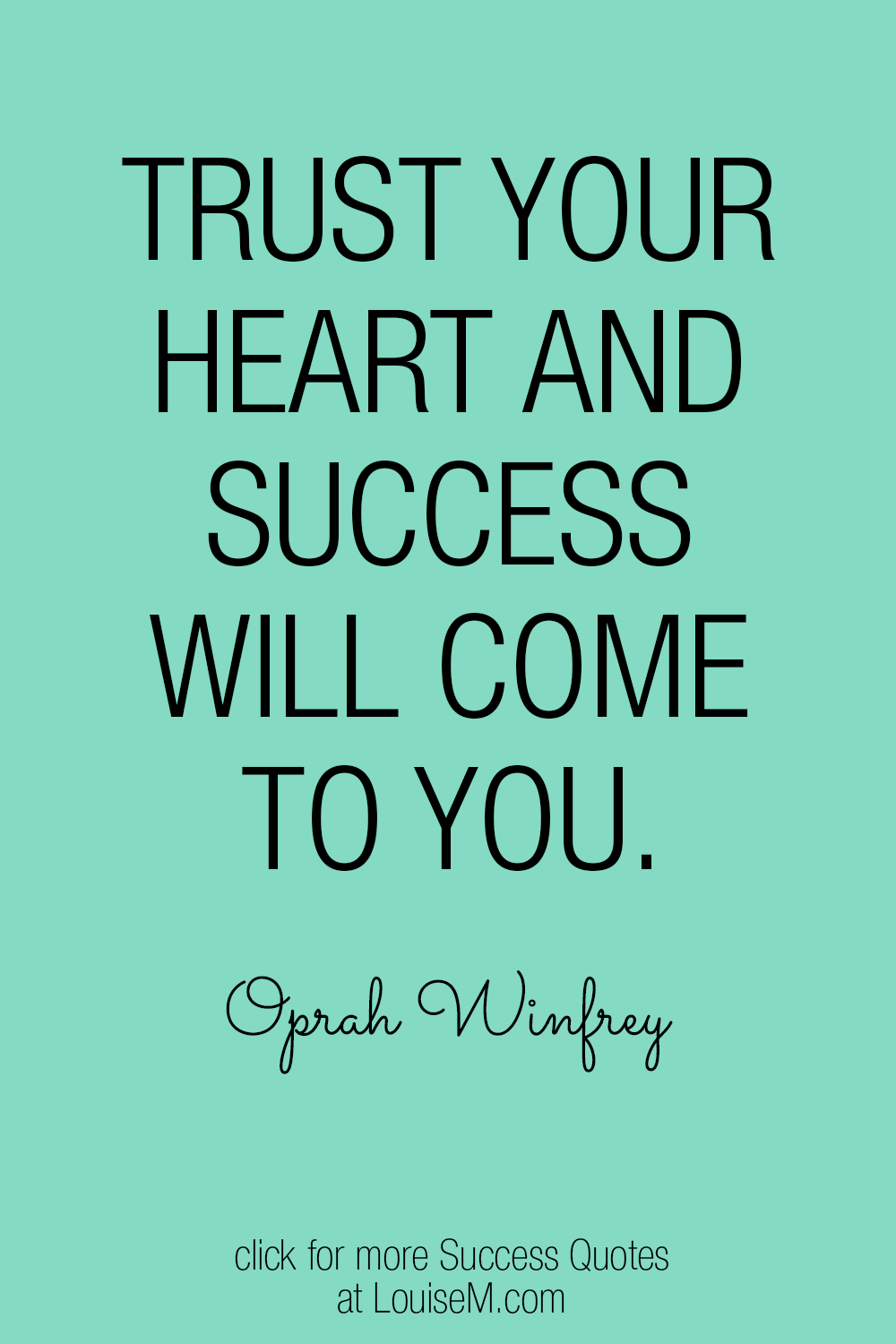 If this is something that you really want to do, if you believe in it…simply keep forging forward because success will come. ~Cassandra Sanford

When you’re building a business, you’re either all in, or you’re not. ~Barbara Corcoran

Don’t get distracted. Never tell yourself that you need to be the biggest brand in the whole world. Start by working on what you need at the present moment and then what you need to do tomorrow. So, set yourself manageable targets. ~Jas Bagniewski, Co-Founder of Eve Sleep 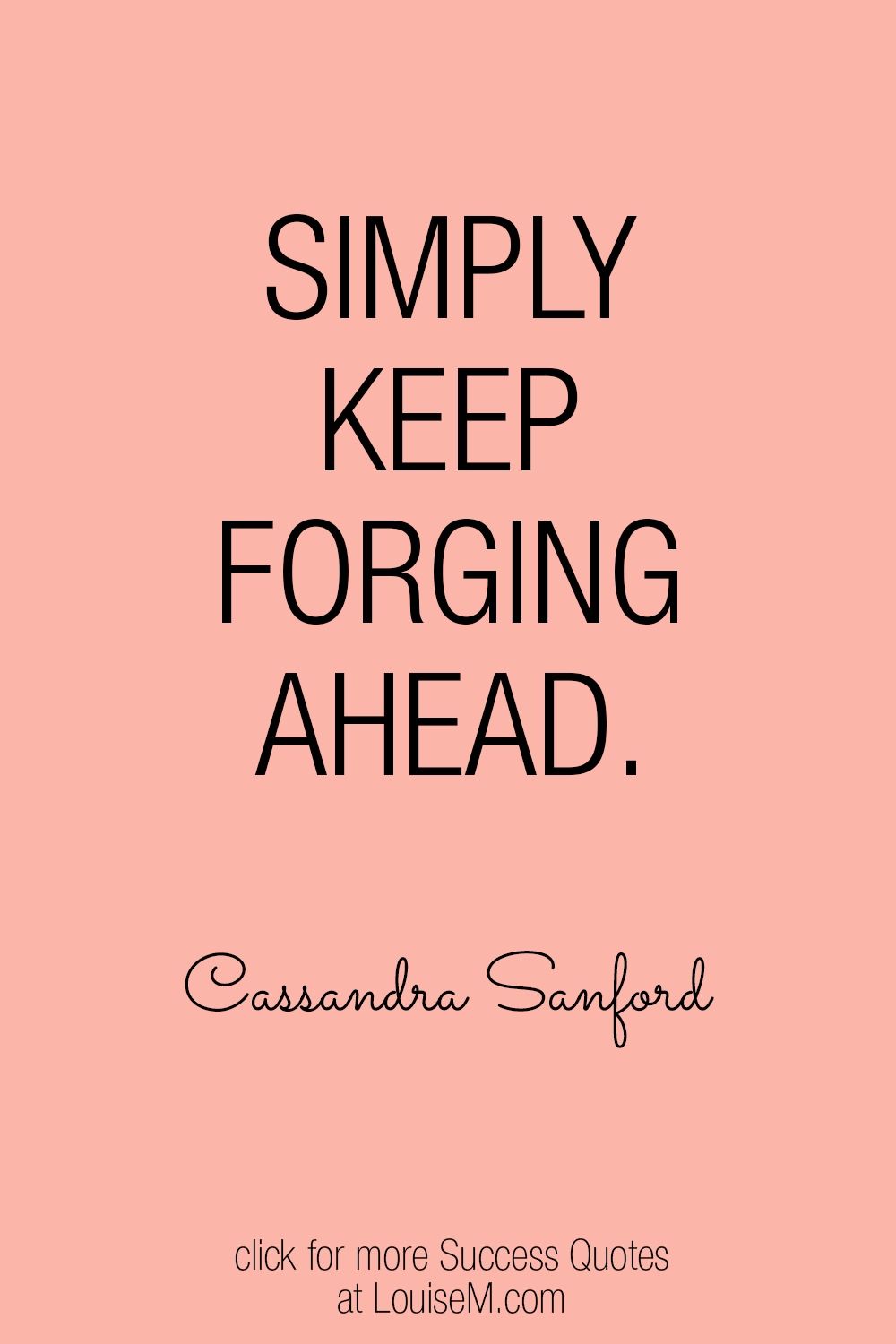 If it doesn’t scare you, you’re probably not dreaming big enough. ~Tory Burch

Selling is not a pushy, winner-takes-all, macho act. It is an empathy-led, process-driven, and knowledge-intensive discipline. Because, in the end, people buy from people. ~Subroto Bagchi, Co-founder of Mindtree

If you know too much before the start, then you will get overwhelmed. Come up with an original idea, and don’t copy because there will be no passion. You need that otherworldly passion. Just start. ~Jeni Britton Bauer, Founder of Jeni’s Splendid Ice Creams.

I owe my success to having listened respectfully to the very best advice, and then going away and doing the exact opposite. ~G.K. Chesterton 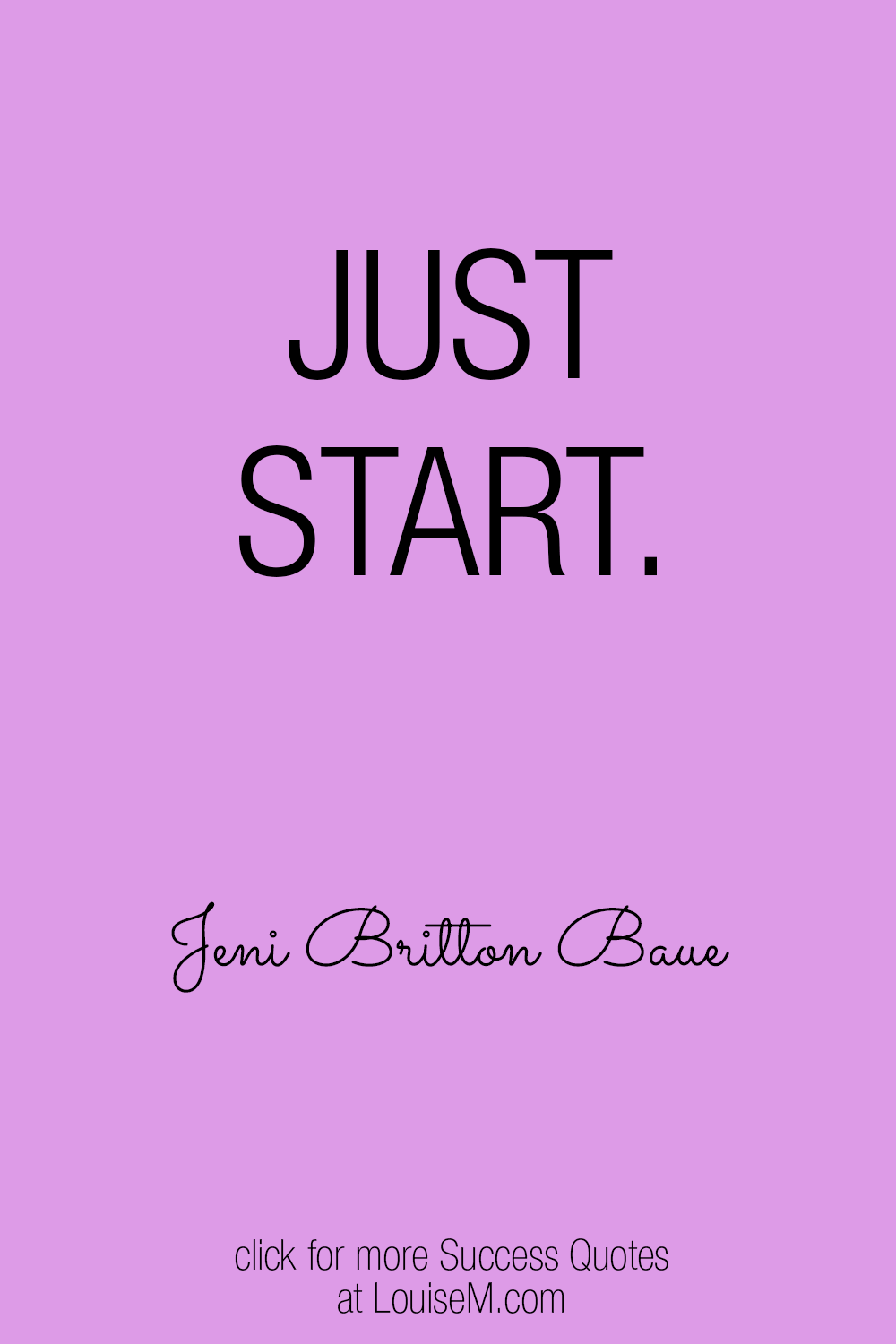 Quotes about success and failure

Success isn’t about how much money you make, it’s about the difference you make in people’s lives. ~Michelle Obama

You get what you give. What you put into things is what you get out of them. ~Jeniffer Lopez

Don’t let others convince you that the idea is good when your gut tells you it’s bad. ~Kevin Rose, co-founded Digg 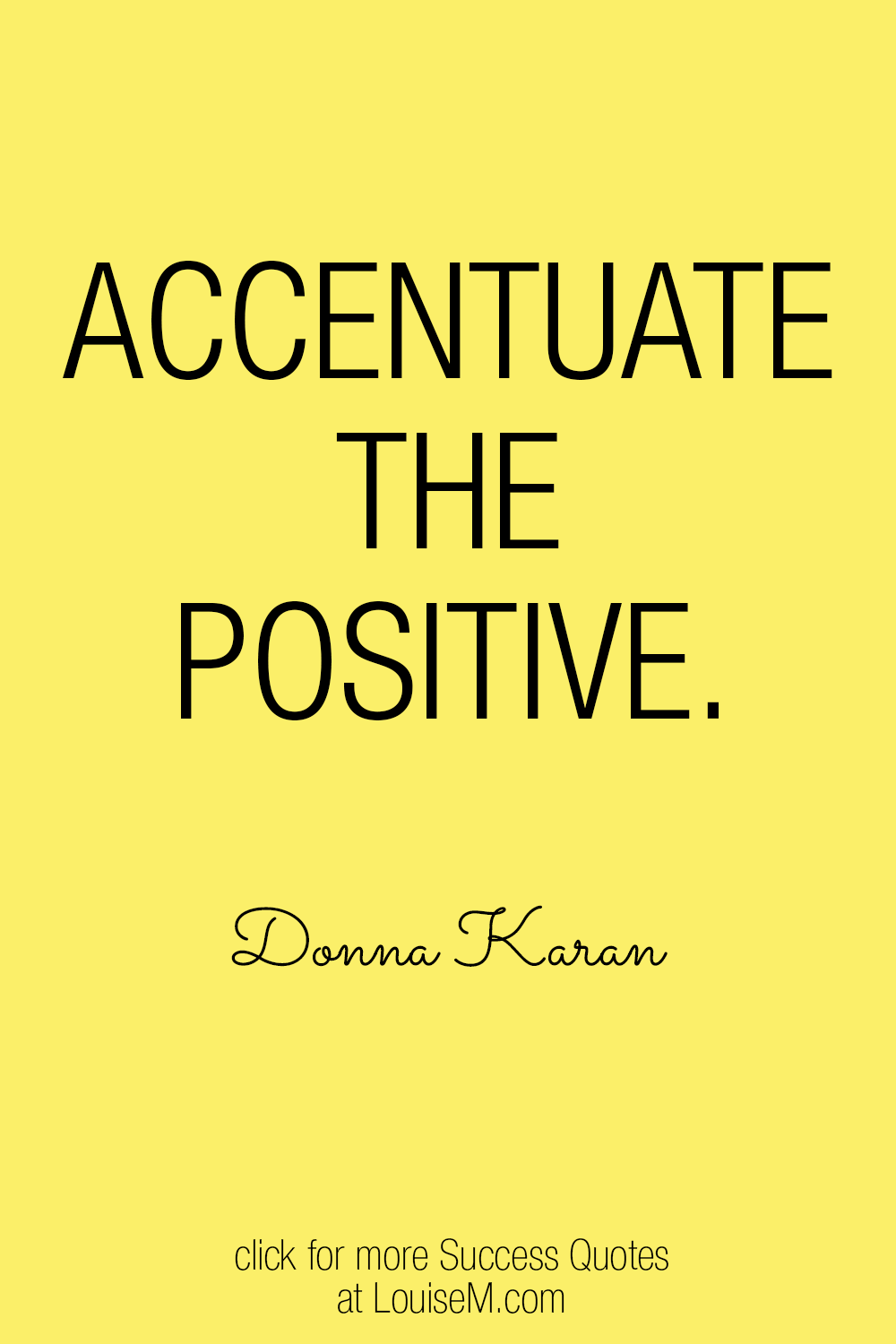 One of the greatest skills of leadership is being unflappable. Anytime you do anything in the world; there’s going to be criticism. ~Arianna Huffington, Co-found and editor-in-chief of Huffington Post Media Group

It’s important to realize that brand is much more than a logo and slogan. A brand is who your company is: how you function and make decisions. ~Joanna McFarland, Co-founder of HopSkipDrive

Do not focus on numbers. Focus on doing what you do best. It’s about building a community who want to visit your site every day because you create value and offer expertise. ~Cassey Ho, Founder of Blogilates.com

You have to see failure as the beginning and the middle, but never entertain it as an end. ~Jessica Herrin, founder and CEO of Stella & Dot

Business opportunities are like buses, there’s always another one coming. ~Richard Branson 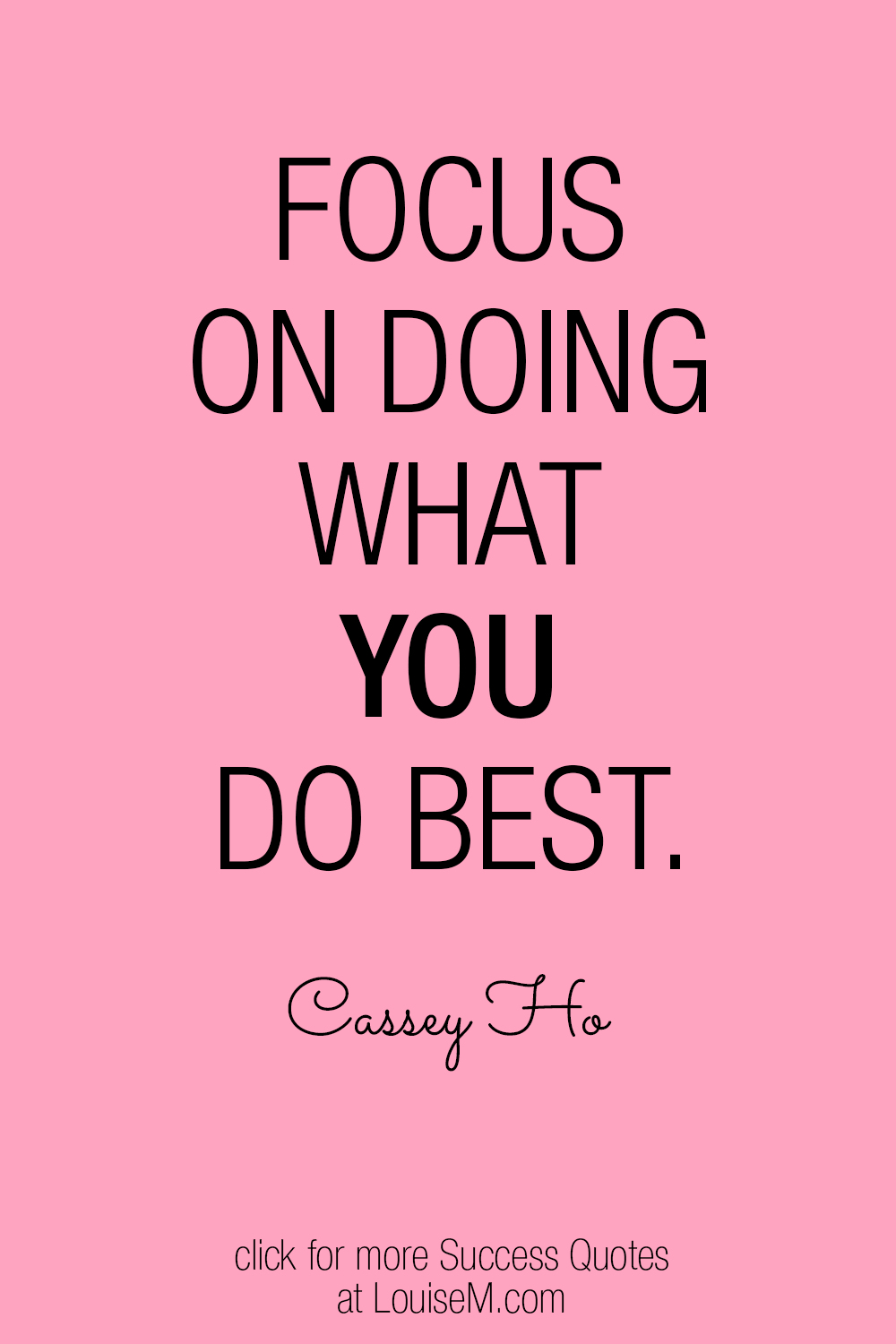 You may encounter many defeats, but you must not be defeated. ~Maya Angelou

If your actions create a legacy that inspires others to dream more, learn more, do more and become more, then, you are an excellent leader. ~Dolly Parton

Success is not final; failure is not fatal: it is the courage to continue that counts. ~Winston Churchill 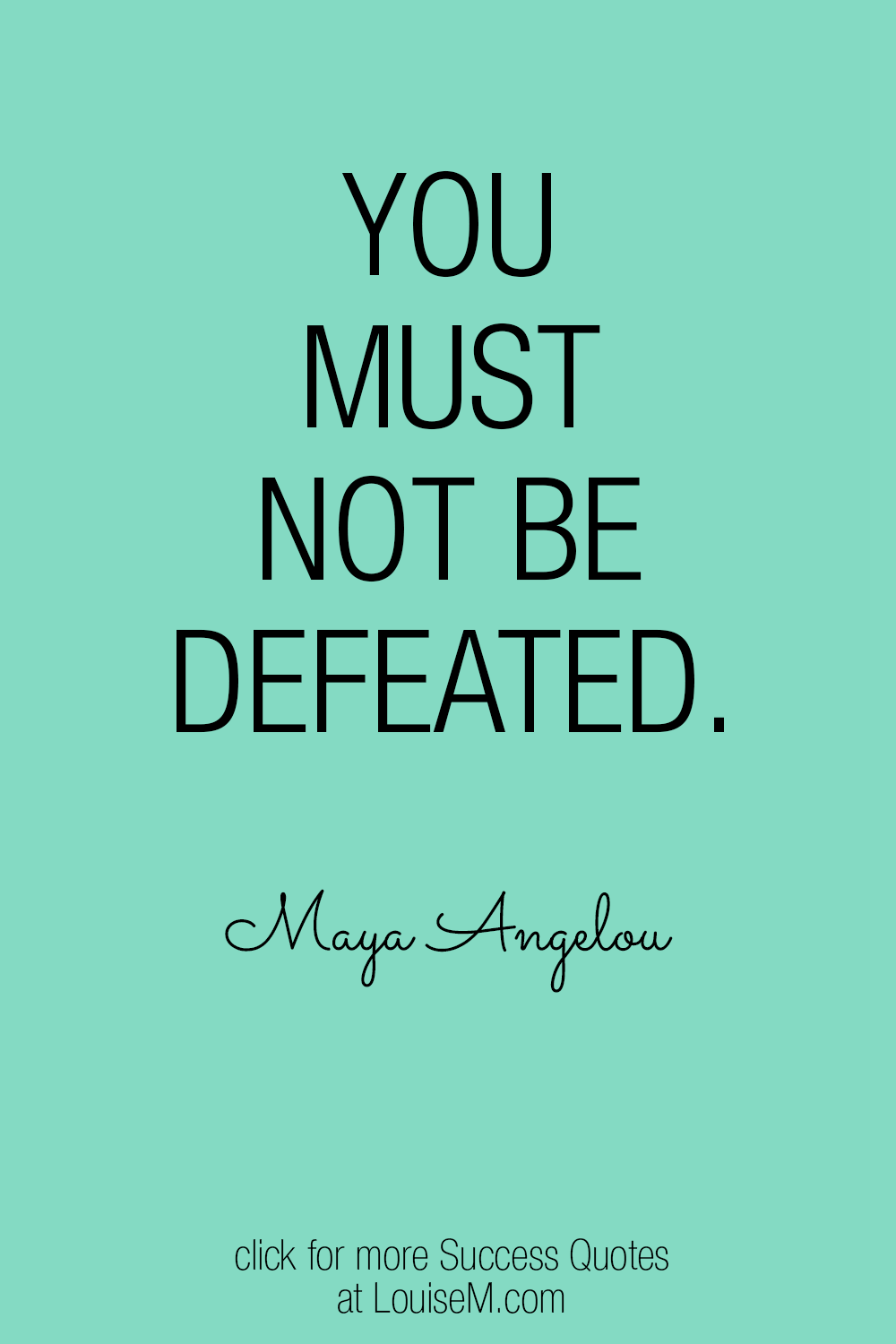 Success usually comes to those who are too busy to be looking for it. ~Henry David Thoreau

Far and away the best prize that life offers is the chance to work hard at work worth doing. ~Theodore Roosevelt

Forget past mistakes. Forget failures. Forget everything except what you’re going to do now and do it. ~William Durant

Your time is limited, so don’t waste it living someone else’s life. ~Steve Jobs

I never dreamed about success. I worked for it. ~Estee Lauder 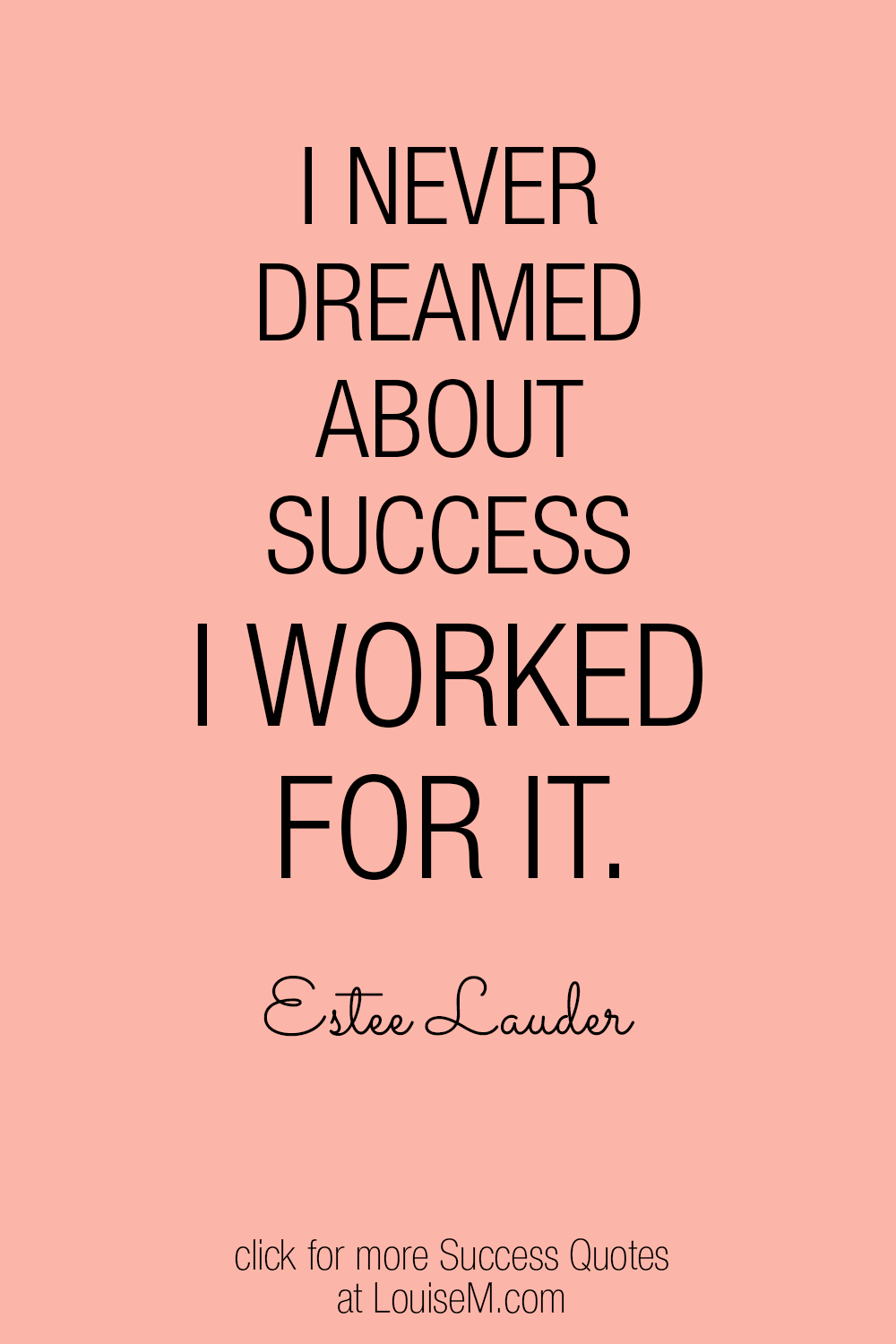 As an entrepreneur, you can always find a solution if you try hard enough. ~Lori Greiner

If you’re starting something on your own, you better have a passion for it, because this is hard work. ~Sallie Krawcheck, Co-founder of Ellevest

There’s no shortage of remarkable ideas, what’s missing is the will to execute them. ~Seth Godin

I don’t know the word ‘quit.’ Either I never did, or I have abolished it. ~Susan Butcher 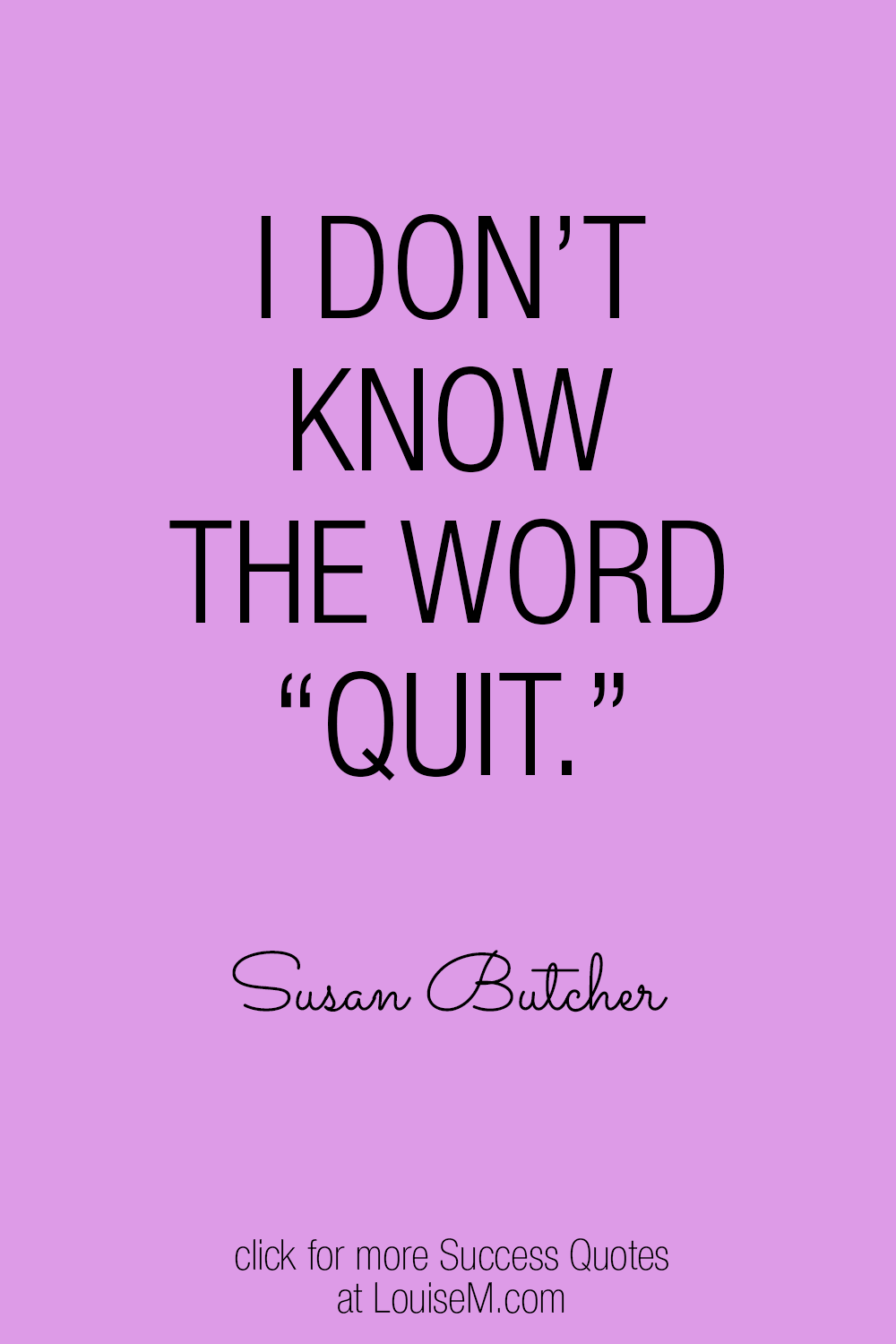 The way to get started is to quit talking and begin doing. ~Walt Disney

There are no secrets to success. It is the result of preparation, hard work and learning from failure. ~Colin Powell

The only place where success comes before work is in the dictionary. ~Vidal Sassoon 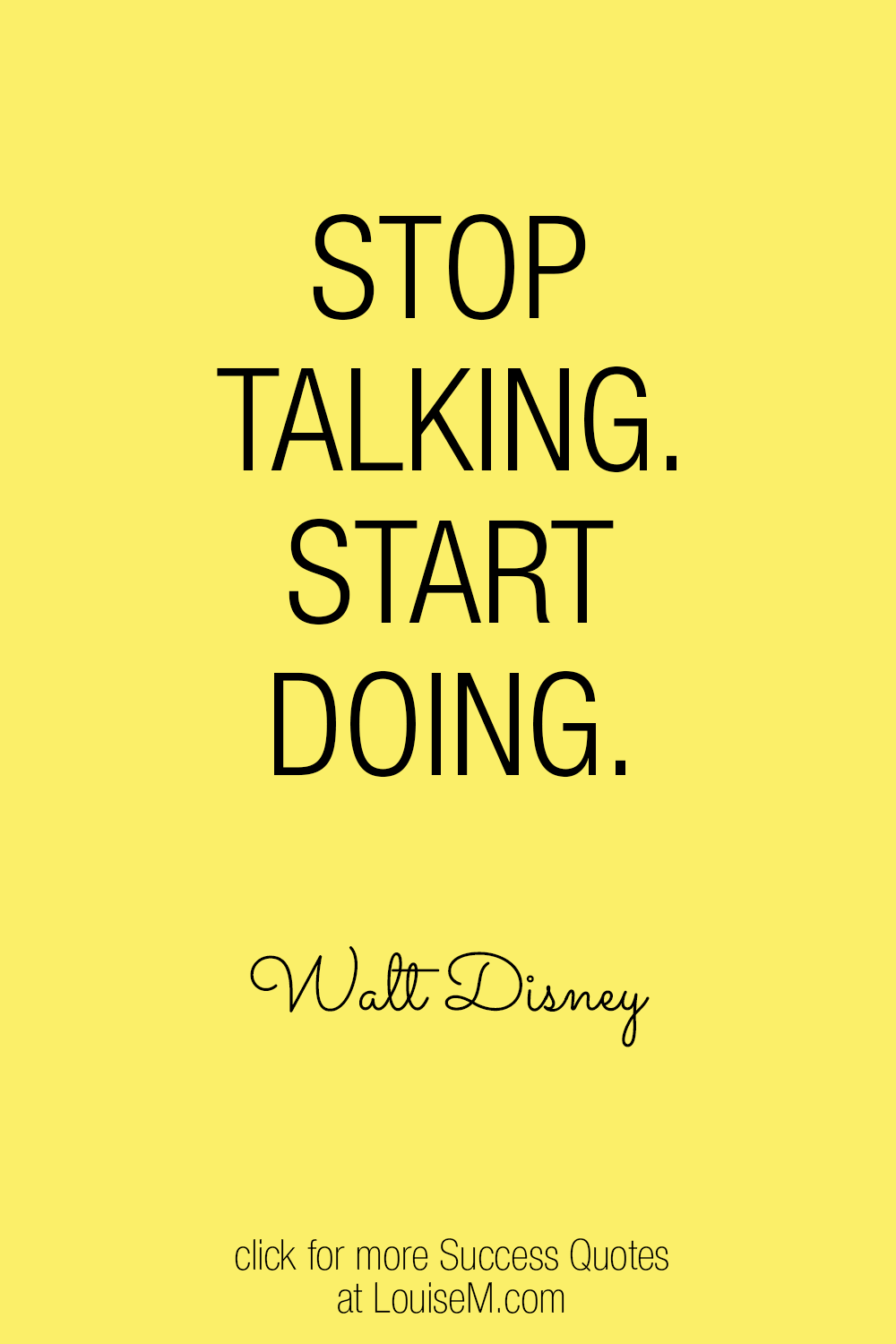 I always did something I was a little not ready to do. I think that’s how you grow. When there’s that moment of ‘wow I’m not really sure I can do this’ and you push through those moments, that’s when you have a breakthrough. ~Marissa Mayer

You have to do what you dream of doing, even while you’re afraid. ~Arianna Huffington

Really take the time to focus on finding your voice and making sure that whatever you’re creating is of high quality and is useful for people in their everyday lives. ~Brit Morin

You have to see failure as the beginning and the middle, but never entertain it as an end. ~Jessica Herrin, founder and CEO of Stella & Dot 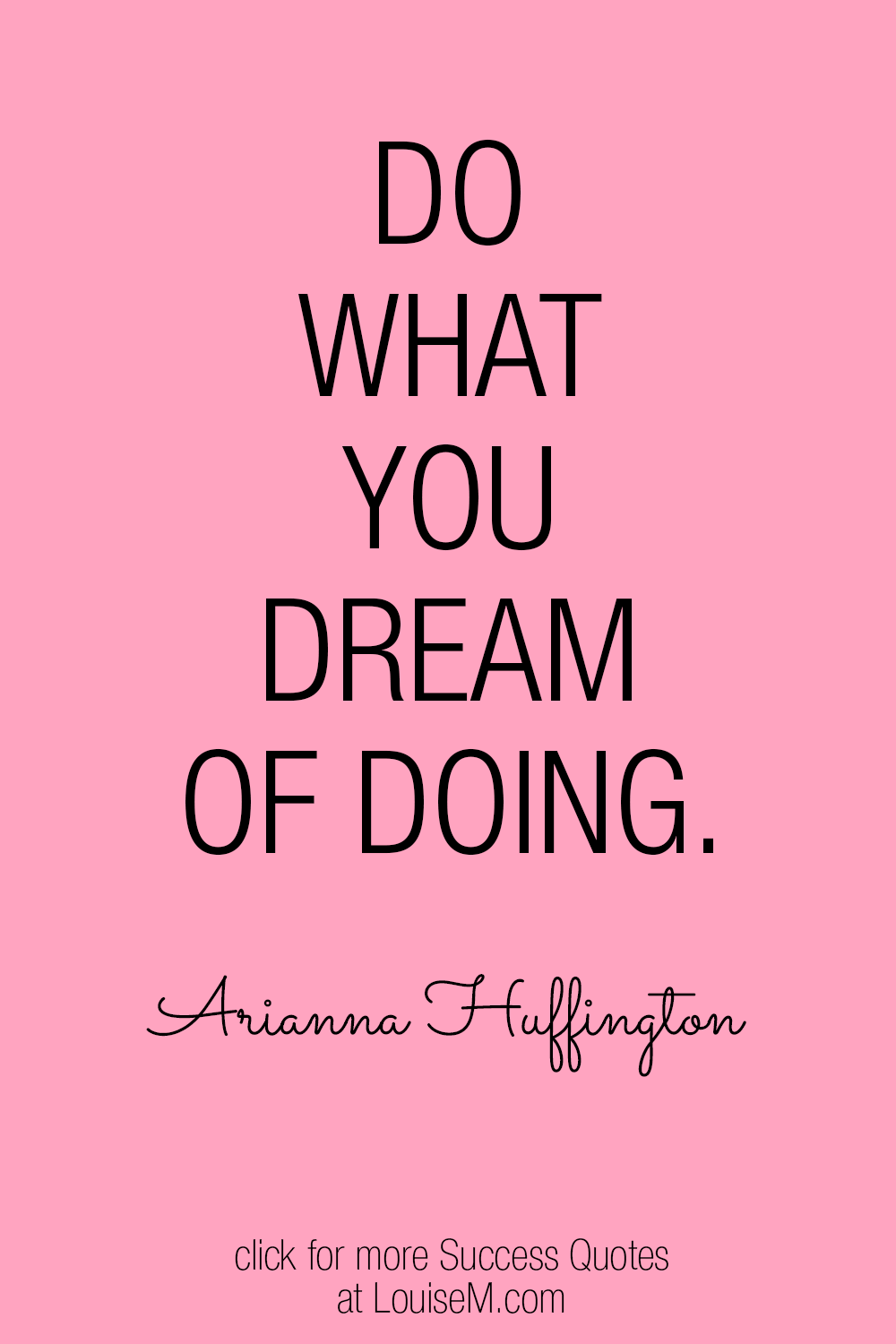 Success depends on employees. For me knowing and connecting with my employees is very important. ~Divine Ndhlukula, founder and managing director of DDNS Security Operations Ltd

Some days you’re smiling and thinking you’re going to make this thing rock. Then the next day a pipe breaks and your costs look too high. You have to learn to keep your eyes on an ultimate goal. If you lose sight of that goal, you have to get out. ~Hamdi Ulukaya, founder and CEO of Chobani

Success is often achieved by those who don’t know that failure is inevitable. ~Coco Chanel 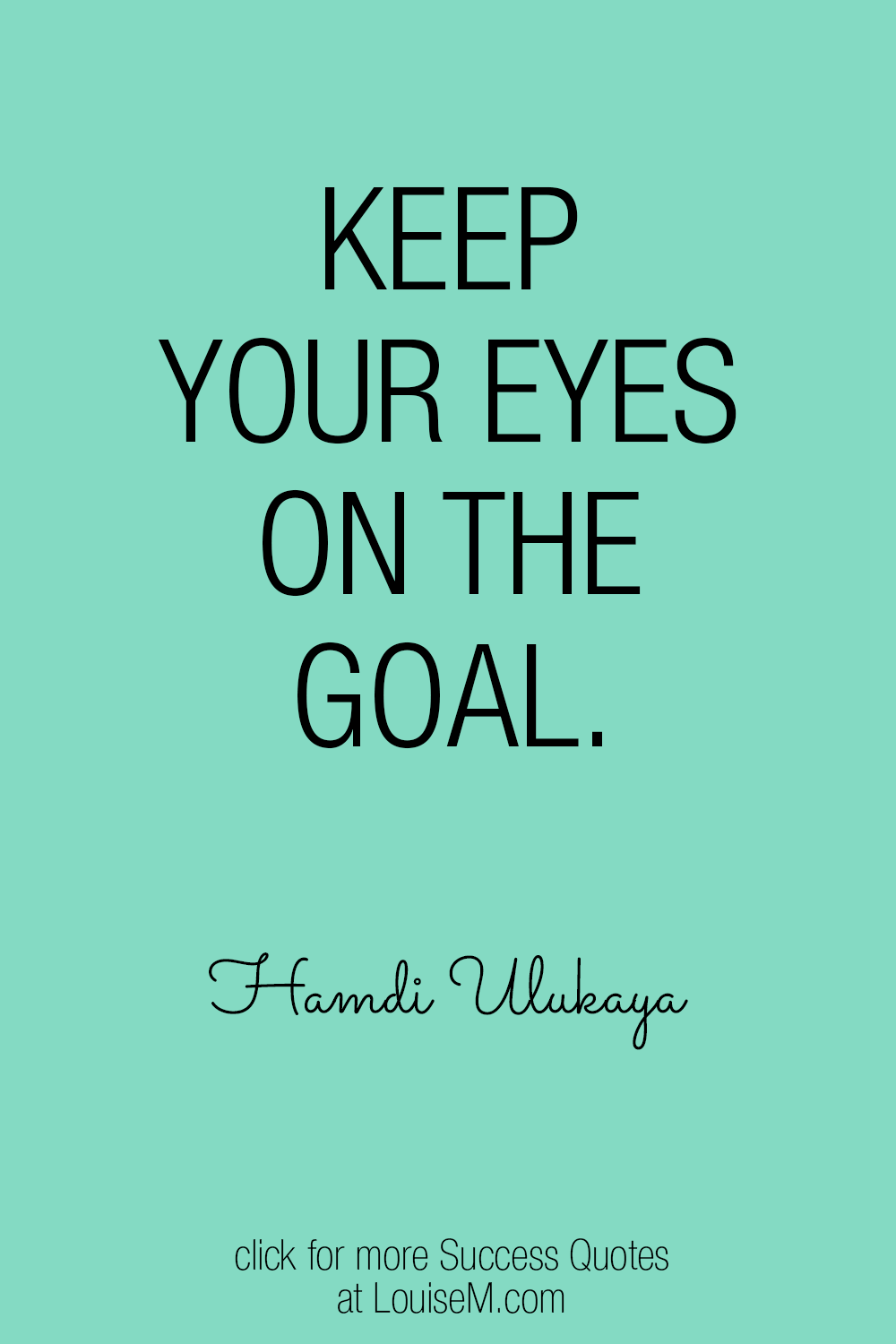 Plus more awesome quotes on an infographic!

If you don’t build your own dream someone else will hire you to help build theirs. ~attributed to both Tony Gaskins Jr. and Dhirubhai Ambani 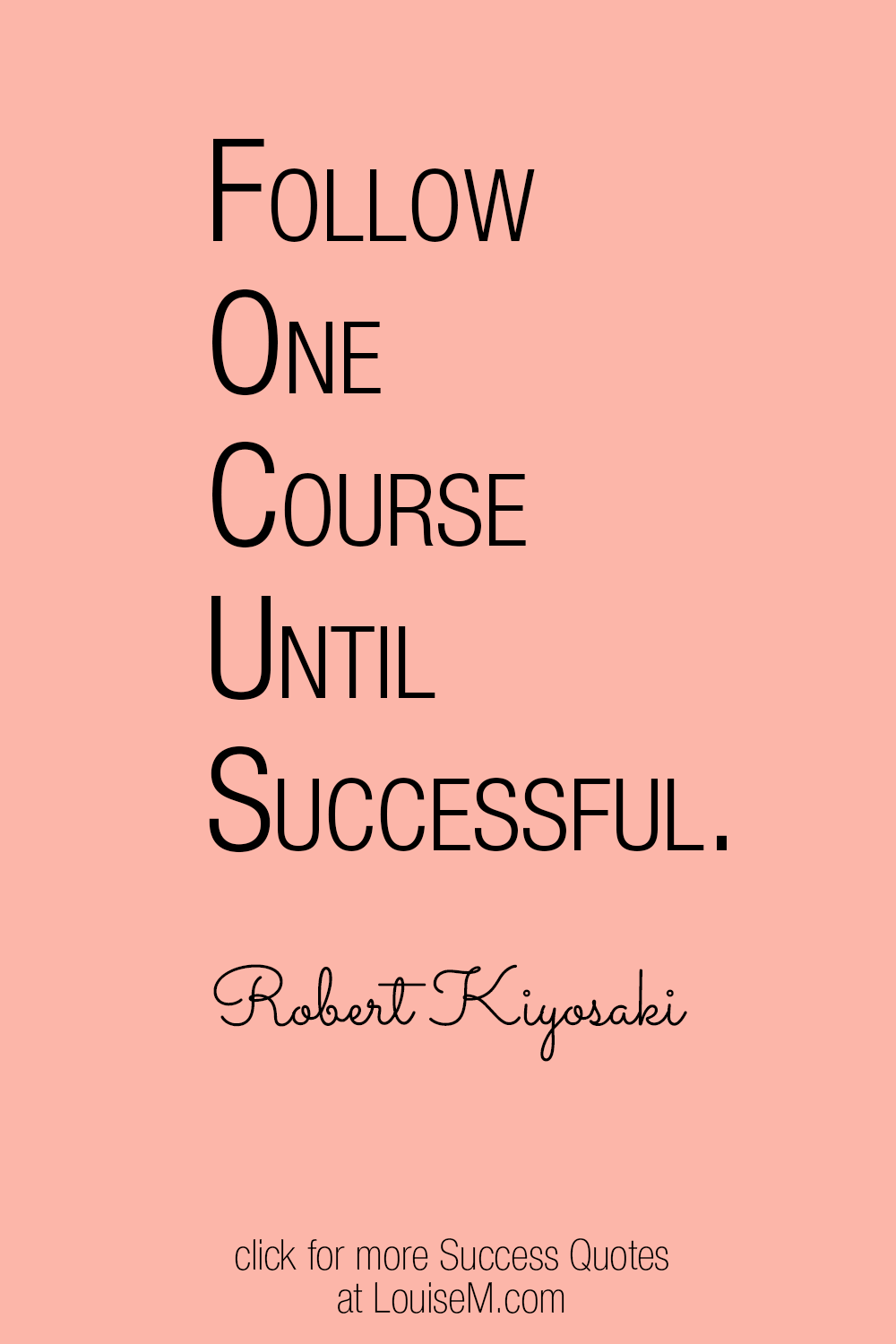 Success is most often achieved by those who don’t know that failure is inevitable. ~Coco Chanel

Failure is success if we learn from it. ~Malcolm Forbes

Success is not a destination, it’s a journey. ~Zig Ziglar

The successful warrior is the average man, with laser-like focus. ~Bruce Lee

Action is the foundational key to all success. ~Pablo Picasso 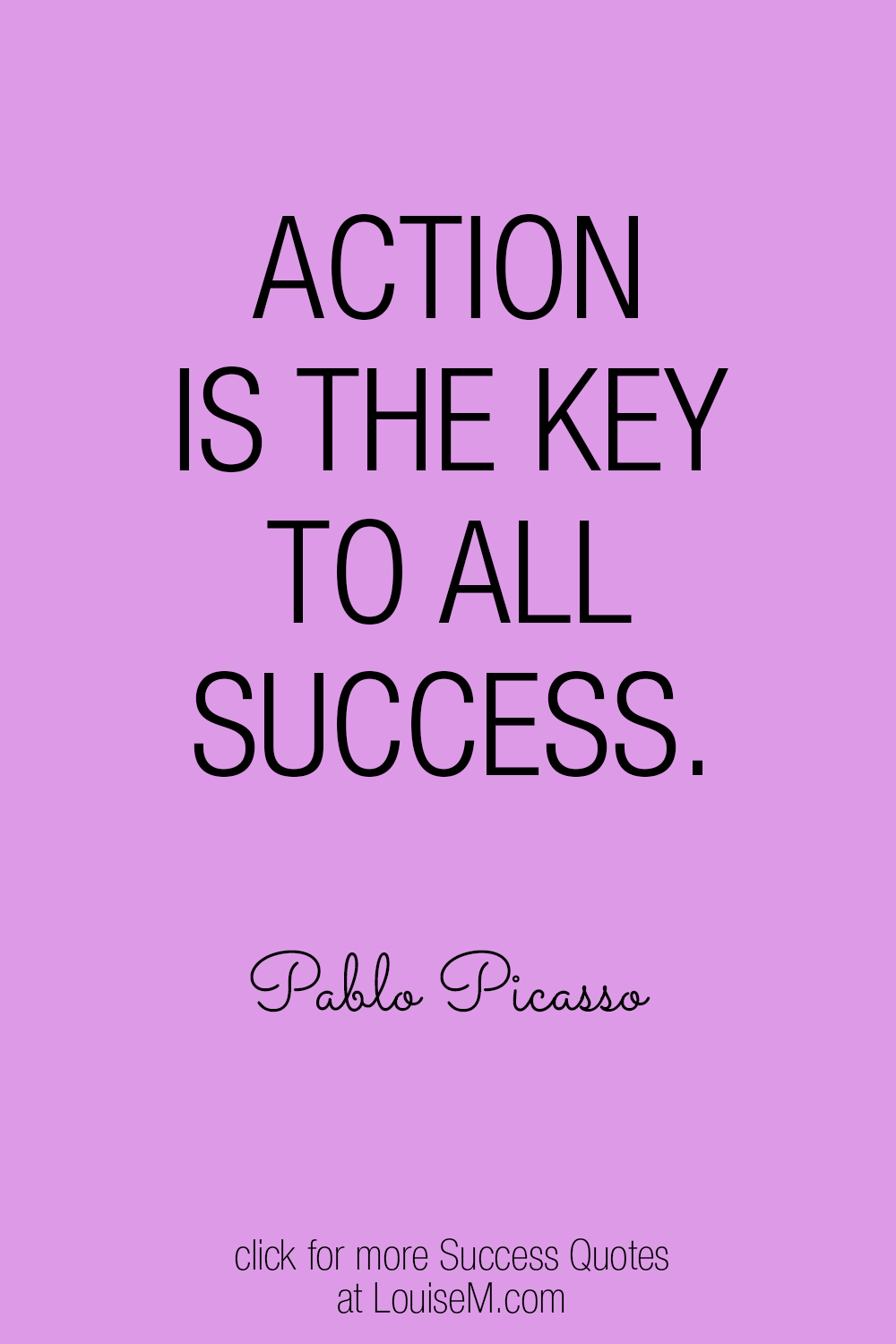 Success represents the 1% of your work which results from the 99% that is called failure. ~Soichiro Honda

Develop success from failures. Discouragement and failure are two of the surest stepping stones to success. ~Dale Carnegie

All of our dreams can some true if we have the courage to pursue them. ~Walt Disney

Don’t be afraid to give up the good to go for the great. ~John D. Rockefeller

A journey of a thousand miles begins with a single step. ~Lao Tzu

The way of success is the way of continuous pursuit of knowledge. ~Napoleon Hill 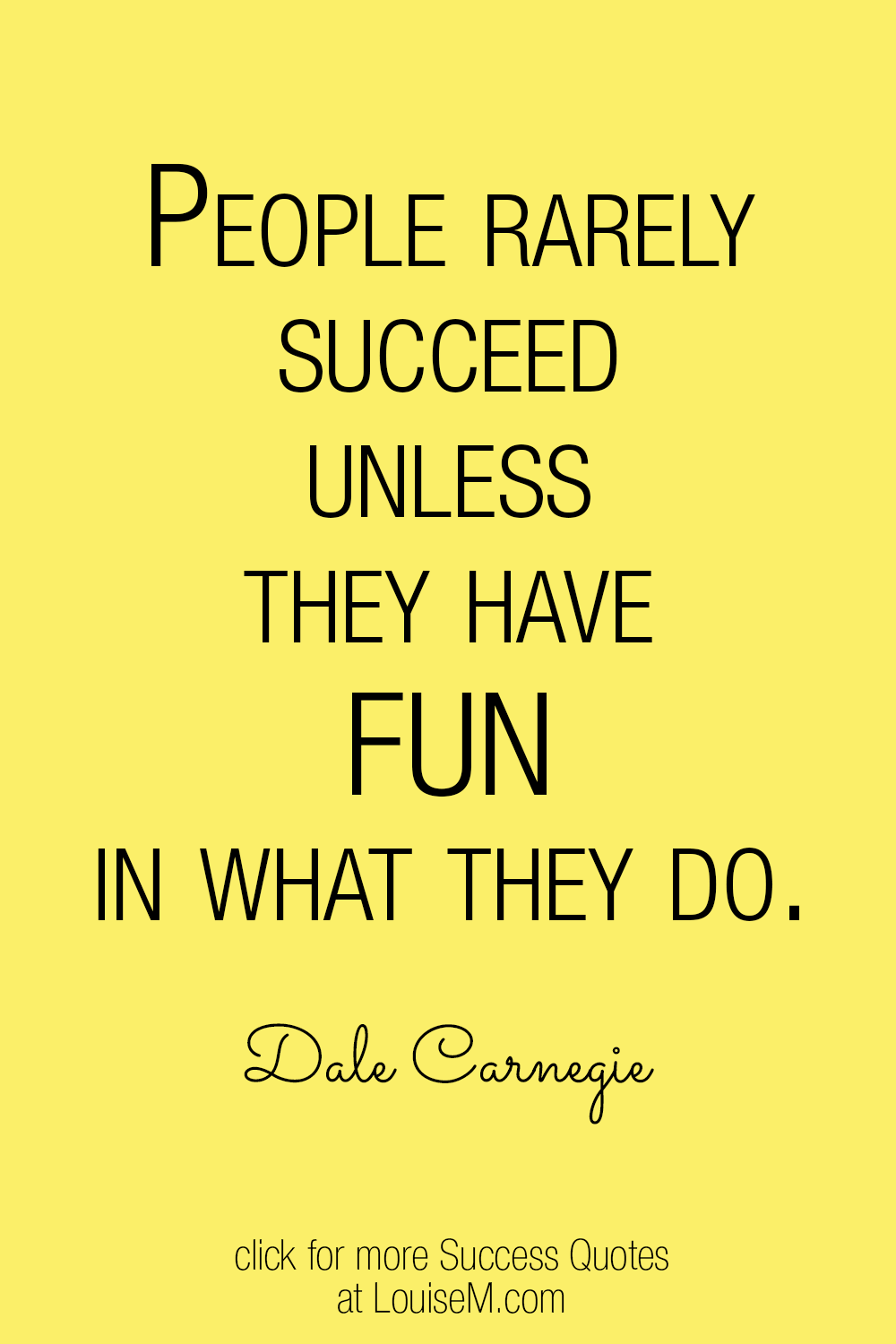 Doing the best at this moment puts you in the best place for the next moment. ~Oprah Winfrey

Take up one idea. Make that one idea your life – think of it, dream of it, live on that idea. Let the brain, muscles, nerves, every part of your body, be full of that idea, and just leave every other idea alone. This is the way to success. ~Swami Vivekananda

People rarely succeed unless they have fun in what they’re doing. ~Dale Carnegie

Whatever the mind can conceive and believe, it can achieve. ~Napoleon Hill

Success is more dangerous than failure, the ripples break over a wider coastline. ~Graham Greene 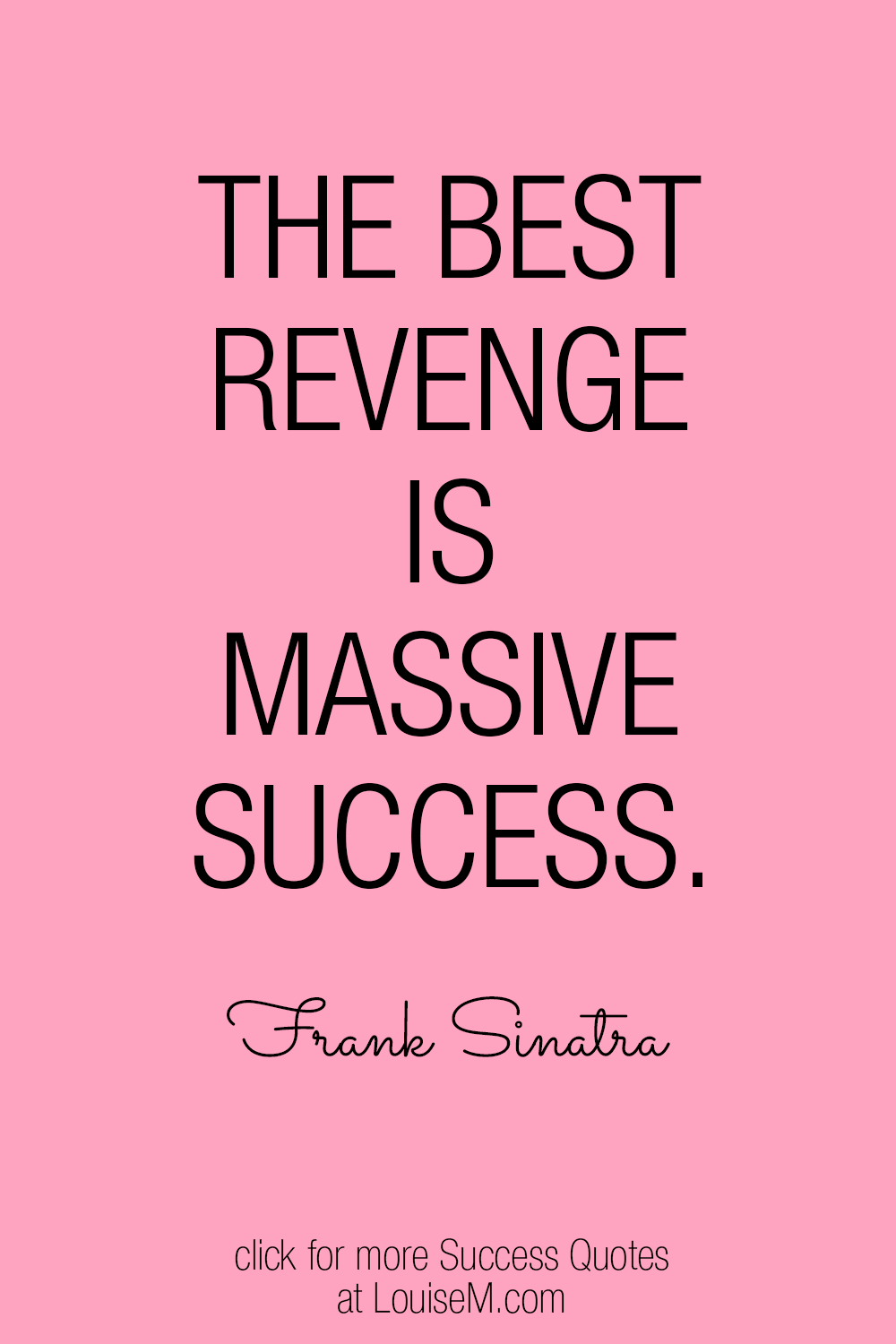 Those who dare to fail miserably can achieve greatly. ~John F. Kennedy

Success is a lousy teacher. It seduces smart people into thinking they can’t lose. ~Bill Gates

These quotes are not only encouraging, but sow seeds of possibility in our minds. Because:

Is it time to alter your thinking? Pin these quotes for daily inspiration!

Let me know in a comment: which is your favorite success quote?