Over the past year, we’ve seen a huge increase in social media referral traffic to our website. In this blog post, I’m going to share our results with you, and then tell you how we did it so that you can implement our tactics in your own strategy. Does that work for you?

If you’d prefer to get right to the How-To portion, feel free to skip right this first section where I get ridiculously excited about our results. 🙂

So, what do I mean by dramatic results? Let’s start by looking at Facebook.

We increased referral traffic from Facebook by more than 700%

September 2016 also saw a huge increase in referral traffic compared to September 2015; however, I suspect that some of that was caused by the trickle down effect of the paid promotions we did during the summer.

We increased referral traffic from LinkedIn by more than 850%

We did not do any paid advertising.

We didn’t commit any financial resources to our LinkedIn posts this year; however, given how successful we were in increasing referral traffic and the quality of traffic, paid LinkedIn advertising may be a strategy to pursue in the future.

That’s nice and all, but how do I get those kinds of results? Well, let me tell you.

How You Can Increase Quality Social Media Referral Traffic Too.

We were able to get these results by spending about 10 hours a week on social media and another 5 or so hours on design and image optimization. Yes, optimizing your social media images is important!

That said, we also did a lot of preliminary work and put a lot of time and effort into creating content that we could share on our social media accounts, which is not included in that 10 hours a week number.

Side note on optimizing images:

If you haven’t been optimizing your image size for each platform up to this point, don’t spend hours going back and resizing all your images. I didn’t. That said, make it a practice to do so going forward. It’s worth it. Seriously.

1. Get to Know Your Audience

I can’t believe how many times I’ve written that down. It’s been said time and time again. The first step to any marketing plan or strategy, is know your target audience. You can do this a number of different ways. My favorite is creating buyer personas and talking with our sales and customer service teams.

I know strategy works because if I look at the analytics for Cheeky Monkey’s accounts, I can see that:

It comes down to this: It doesn’t matter how you do it, just make sure you get to know your audience. End of story.

2. Be Selective When Choosing Social Media Platforms to Prioritize

Rather, you want to focus on:

In the end, no matter how many platforms you choose to focus on, whether it’s 1 or 5, make sure you have the resources available to post and engage consistently.

At Cheeky Monkey Media, our social media efforts focus on Facebook, Twitter, and LinkedIn. We focus on these because:

Sound familiar? Yeah, I thought so.

3. Make Sure Your Profiles are on Brand and Consistent

Once you’ve decided which social media platforms you’re going to focus on, you need to make sure that each and every one of your profiles is fully filled out, on brand, and consistent across the board.

Here’s what I mean: 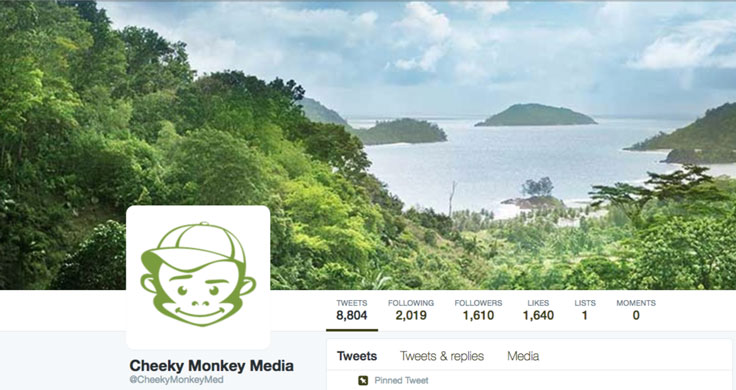 LinkedIn (based on the old LinkedIn company page):

As you can see, our profile pages don’t look exactly the same, but, they are consistent and recognizable as part of the Cheeky Monkey Media brand.

Make a list of the influencers in your sector. These do not have to be the biggest names in your industry. They can be micro influencers. For example, I include guys like Rand Fishkin from Moz, one of the biggest names in SEO, on my list. Rand’s awesome and responded to the email I sent him. However, I had more success reaching a larger audience and creating relationships when I interacted with smaller names on my list.

Finding influencers can be tedious: you have to first know a handful of names, then see where it takes you. And all that sourcing sometimes doesn’t yield much. It could take hours, even days, just to compile a big enough list.

I recommend using NinjaOutreach for this purpose because you can easily find any influencers in your niche with a simple keyword search. You can know nothing and nobody, and yet still get substantial results on who to connect with later.

Note: Try Ninja Outreach free for 14 days. If you decide to purchase a plan, LouiseM.com will receive a referral fee that helps support our free content. Thanks!

Once you’ve compiled your list, make sure you interact with them: 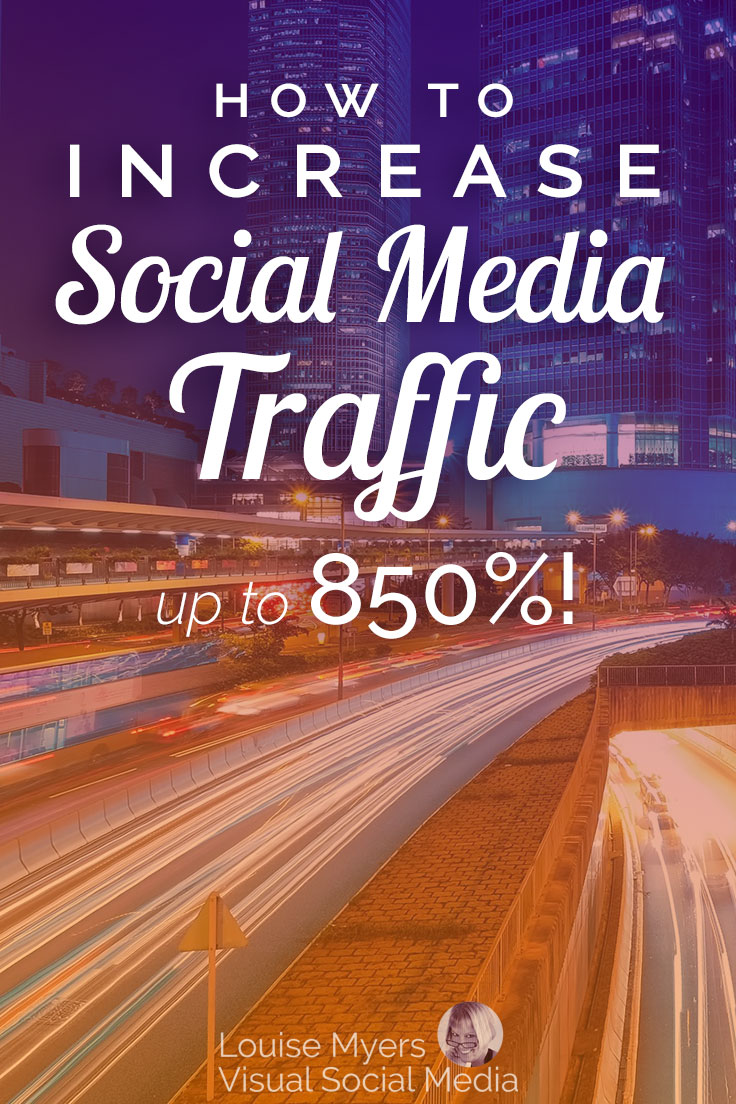 You aren’t going to get far if you aren’t ‘social’ on social (step 6) and curating great content (step 7), but you can’t forget the importance of creating and sharing your own valuable content and information.

Creating and sharing your own content will help you position yourself as an expert and/or valued resource in your area.

Now, I don’t mean that you should create multiple blogs, videos, infographics, and interactive games a day. There’s an oversaturation of content as is.

You do need to participate in the conversation with informative and engaging content.

My favorite way to do this is to talk to the sales team at Cheeky and see what kinds of questions prospective clients are asking.

Then, I write the most informative blog possible on that topic. It’s a win, win. I know I’m writing content that matters to our target audience right now, and I able to provide the sales team with valuable content.

Use Secondary Sources and Acknowledge Them

At Cheeky, our blogs have to be at least 900-1200 words long, and they have to include at least 5 external links.

There are three reasons for this:

6. Talk to People! It’s Called Social Media For a Reason

You don’t have to have marathon conversations, but it’s always a good idea to thank people for sharing or retweeting your posts and asking questions.

Even exchanging a series of GIFs counts as a social exchange. My favorite social conversations on the Cheeky Twitter account were with a reporter in Ontario and the team at Buffer.

Here’s an example from my chat with the team at Buffer: 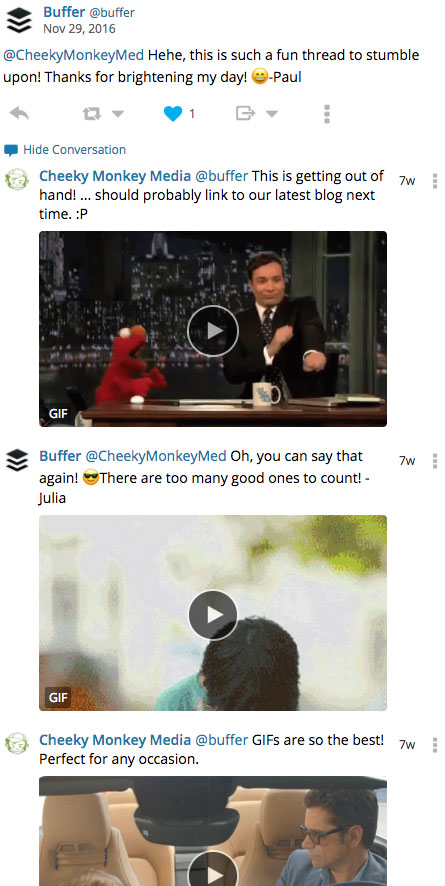 You’re probably one of the coolest people ever, and the organization you work for probably kicks some serious a$$.

But, there’s a couple things you need to know about social:

Use places like Buzzsumo or CRATE to find other content in your niche. This not only saves you and your team from creating that content, it also, again, shows that you are participating in part of a larger conversation.

When I started at Cheeky, I was strongly against using social media management tools. For starters, Scott Stratten, the co-author of UnMarketing and the co-host of the UnPodcast, the guy who got me excited about marketing, is not a fan. And then there’s that whole thing about Facebook’s algorithm frowning on automated posts.

But, then I realized that if I wanted to post twice a day on Facebook, ten times a day on Twitter, and once a day on LinkedIn, and get the rest of my internal and client work done, I was going to have to concede complete and total control. Sigh.

That said, don’t completely automate your social media communications. Review your notifications at least daily and respond to those who comment, respond, or retweet personally. If you would like to acknowledge new followers (which is a great strategy when you are just starting to grow your follower base), personalize that interaction.

Once you find a strategy that works, make that your core strategy. That said, don’t stop trying new things. You can test everything from posting slightly different content, to posting more video, to posting more or less times in a day. Really, the list is endless.

My recommendation is to test one or two small changes for a week or 2, review your results, and then decide if the test is worth implementing or pursuing further, or, if you’re better off trying something else.

As I wrote this post, one question kept nagging at me. Was there one strategy that made the biggest difference? I don’t think so.

While the biggest increase in engagement seemed to correlate with the push to ‘tag’ micro influencers, our followers, and potential followers, and the commitment to consistent and frequent publishing, I couldn’t have taken these steps if we hadn’t taken the time to get to know our target audience and produce valuable content.

Thus, I would argue that you need to apply all of these tactics to your social media strategy in order to see significant improvements.

At the end of the day, like with all things in life, you’re only going to get as much out of it (your social media platforms) as you put into it. That doesn’t mean spending all of your time on social, but it does mean taking the time to do it right.

Finally, note that social media isn’t just about social media. For example, that point about creating valuable content that uses qualified secondary sources that you can tag in your social media communications …? That step also opens up doors to link building and contributes to your SEO strategy, but that, folks, is a whole other blog post.

Pin this post so others can learn how to increase social media referral traffic! 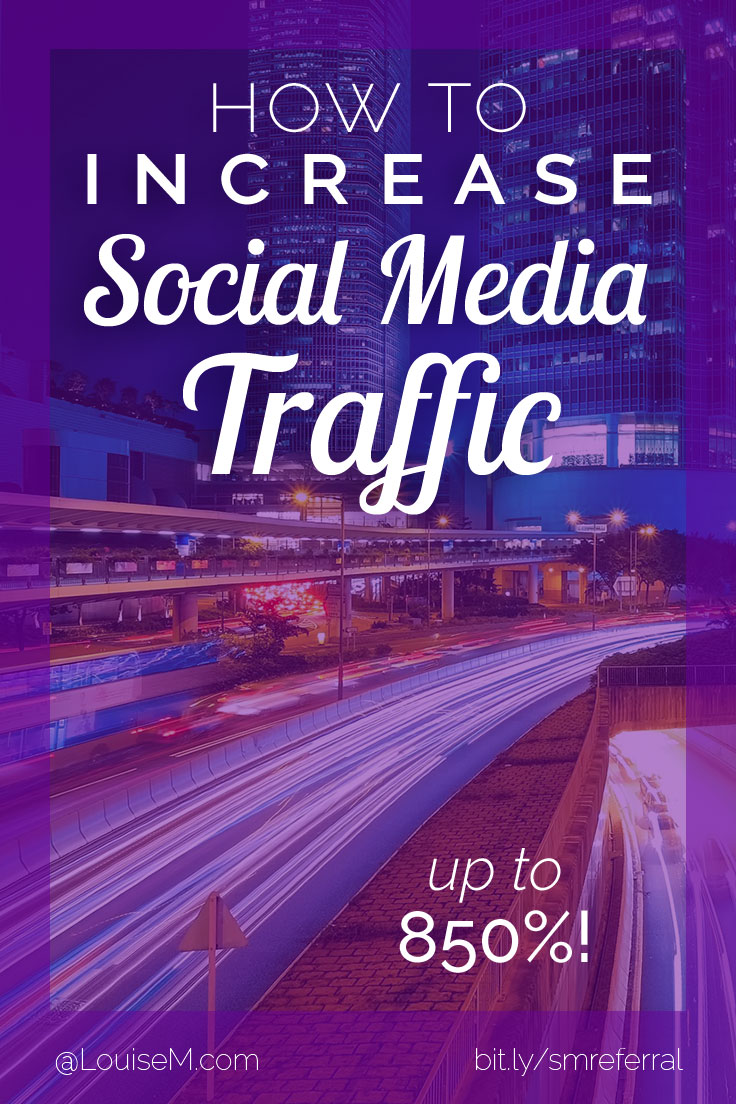 Spela Grasic is a Marketing Specialist at Cheeky Monkey Media – a digital marketing agency that specializes in Drupal and WordPress web development and design. When she isn’t writing extremely long blog posts, she’s playing with her Blue Heeler / Shepherd Cross or curled up on the couch taking a nap.