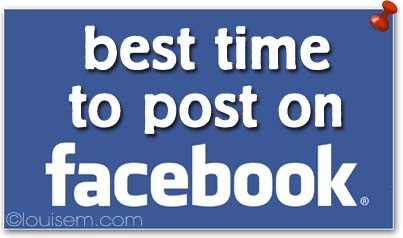 The best days and times, as well as the worst, are revealed in a new report from Buddy Media. [pinit]

Many Facebook Fan Pages are doing it all wrong.

Only 14 percent of posts by brands are published on the weekend, yet posts on Saturdays and Sundays receive 14.5 percent more interaction compared to weekday posts.

The Buddy Media report analyzes user engagement from more than 18,000 Facebook Pages of the world’s largest brands, for the months of April & May 2012 (after the switch to Timeline). These pages have many thousands of fans – for the small business FB Page, your mileage may vary. The point of the report, however, is well taken: the best time to post on Facebook is when fans are the most active. “When not at work, people are more likely to spend time perusing Facebook and interacting with Page content,” the Buddy Media report says.

Keep it short. It’s all about brevity on Facebook. Posts with 80 characters or less receive 23% higher interaction than longer posts.

Call to actions still work. Telling fans how they should interact will help drive specific types of interaction.

Download the full report, “Strategies for Effective Wall Posts: A Timeline Review,” and you’ll learn much more, including the best days to post for each industry.

My experience has been, when posting during evenings and weekends, I need to focus on being entertaining. Fans don’t seem to be as interested in thinking about work during their off-hours.